Start a Wiki
This article is about the in-universe article about Kim's website. You may be looking for the real world Disney Kim Possible website. 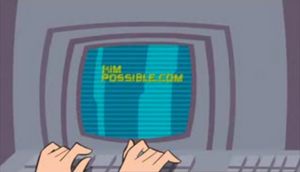 Kim's website is her primary means of contact with the world at large. It is the avenue by which most people reach her, and ask for help.

The first version of the page was constructed by Kim in middle school. It was intended as an advertisement for her burgeoning career as a babysitter and overall helper. It came with the then-seemingly "braggy" tagline, "I can do anything!"

Kim's first rescue mission came when Mr. McHenry and Mr. Paisley were pinned down by the McHenry Laser Grid. Typing with his toe, McHenry tried to reach the website for Team Impossible, but got Kim's by mistake. Kim showed up, with Ron and Rufus in tow, and the rest is history.[1]

At some point after that, Wade became the webmaster of the website. Where Kim once screened requests on her website personally, Wade took over and streamlined this task, alerting Kim to top priority jobs either through the Kimmunicator, or the computer in her locker at school.

Additionally, not every hit on the website was a request for help. Several of Team Possible's villains knew of it as well, and occasionally used the website to make demands or threats.[2]

The original website
Add a photo to this gallery

Retrieved from "https://kimpossible.fandom.com/wiki/Kim%27s_website?oldid=24397"
Community content is available under CC-BY-SA unless otherwise noted.