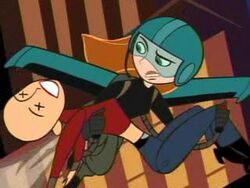 Sock puppeting is using more than one account in order to violate Kim Possible rules or cause disruption. The user who uses a sock puppet may be called a sock puppeteer. Using sock puppets is usually not encouraged.

Using multiple accounts is not always bad. When people use sock puppets, it is recommended that they link to their original account. It will be easier to know the status of an account. Some people feel a Wikian should not have more than one account. Some others feel if sock puppet accounts are used for good purposes, then it is fine (e.g. one creates a sockpuppet to edit on public computers). See this page for information on how sock puppetry affects other online communities.

Alternative accounts have legitimate uses. For example, prominent users might create a new account to experience how the community functions for new users.

Some editors use alternative accounts to segregate their contributions for various reasons:

Doppelgänger is a German word for a ghostly double of a living person. In the context of a user account, a doppelgänger account is a second account created with a username similar to one's main account to preemptively prevent impersonation by vandals. Such accounts are permitted and should be redirected to one's own userpage). Doppelgänger accounts should not be used for editing.

Clean start under a new name

If you have a negative track record and you have decided to make a genuine, clean, and honest new start, and do not wish it to be tarnished by your prior conduct, you can simply discontinue using the old account(s), and create an unconnected new account which becomes the only account you then use, and is used in a good manner.

When an account is discontinued, it is recommended that the old account be noted on its user page as being inactive, in order to prevent the switch being interpreted as an attempt to abusively sock puppet.

Repeated switching of accounts is usually seen as a way of avoiding scrutiny and considered as a breach of this policy. This option is also not available to users with permanently blocked accounts, who are prohibited from editing Kim Possible Wiki altogether, either anonymously or under any user name.

Editors who operate bots have to create separate accounts (and request they be marked as bot accounts by contacting wiki bureaucrat User talk:RRabbit42), so the automated edits can be filtered out of recent changes.

Retrieved from "https://kimpossible.fandom.com/wiki/Kim_Possible_Wiki:Sock_puppetry?oldid=18705"
Community content is available under CC-BY-SA unless otherwise noted.