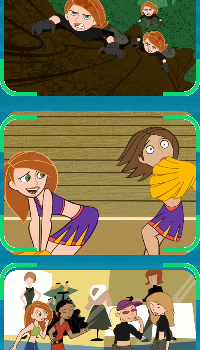 Kim: I got here as fast as I could. What’s the sitch?

Monique: You should see for yourself.

Kim: (looks at Kim style on each mannequin) Monique! Is this some stupid ploy to get me in at the senior table?

Monique: Not even! It’s Kim style. And it is bomb on bomb!

Kim: Kim style! You do mean my style?

Monique: You belong to the world now. (they look at the girls wearing Kim style leaving the shop)

Kim: (looks at the camera) I’m the new pink poof?!

Ron: How many Bonnies are there?!

Monique: What’s next? A line of clothes for pets?!

Kim: I liked you better naked.

Drakken: Rest assured, gentleman, my Kim clone will be a wild animal.

Drakken: You brought me the wrong DNA!

Drakken: Actually, I think we can work with her.

Rock star: Do you wanna rock?

Drakken: Get a haircut!

(switch to "The Style File" on TV)

Drakken: Ooh, The Style File. Perhaps this season blue skin is in.

Fashion lady on TV: As I predicted, the new look inspired by high-tech teen, Kim Possible is sweeping the world.

Bonnie: Thanks... and nice try but you really can’t pull this look off.

Bonnie: Kim Possible, you are such a loser. I mean, you wear that same stupid outfit, like, every day.

"The Kleeg Report/The Style File": A spoof of Style with Elsa Klensch on CNN.