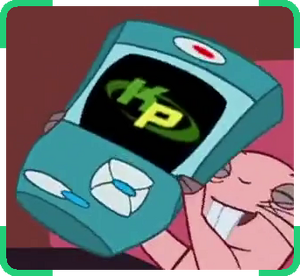 The Kimmunicator is a multipurpose communications and computing tool used by Kim Possible.

The Kimmunicator is a hand-held device, approximately the size of a PDA or palmtop computer. It has a relatively large color screen taking up about half of its face. Several buttons, ports for sensors and cameras can be found on the housing. It is constructed of unknown materials, likely high-impact plastic, and is a pale blue in color.

Later, a wrist-mounted model, with a round screen and several buttons on the rim of the device, was introduced, supplanting the old hand-held model. First appeared in Odds Man In.

The distinctive ringtone of Kim's Kimmunicator.

Its primary role is as a communications link between Kim and Wade, and this is the function seen most often. It seems large for the job, given the compact nature of the modern cellular phone, but it is a marvel of miniaturization given all it can do apart from just communicate. In addition to the usual smartphone options, it has two-way video, serves as a sensor device, a jamming frequency generator, a camera, and has several self-mobility functions, including wheels, skis, and the ability to fly on its own.

Most of its functions are activated remotely by Wade, but Kim is able to use some of them herself. It is not known if the device has all these functions at the same time: the Kimmunicator has been lost or destroyed several times in Kim's career, but it was always replaced soon after; thus, it is possible the replacement units had upgraded abilities.

The Kimmunicator is a unique item, created by Wade just for Kim, and undergoes regular upgrades. It is powered by a trilithium power cell, an advanced super-battery that can carry enough charge to power much larger devices such as Drakken's brain switch.

This battery lasted almost four years before needing to be replaced, under even the extreme abuses to which it was subjected.