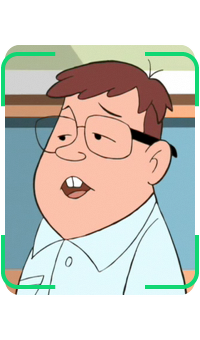 Larry is the nerdy cousin of Kim Possible. Kim strongly prefers not to spend time with him, as they have absolutely no interests in common, but Ron and Rufus consider him "majorly fun" largely because he shares their love of role-playing games.

Larry is the extreme stereotype of a "nerd"; he is completely obsessed with several classic non-mainstream topics (comic books, science fiction movies and novelizations, and fantasy role-playing games)[1][2], exhibits poor social skills, at times has difficulty telling the difference between reality and fantasy[2], and has an extensive collection of action figures in his room[1]. He generally had little patience for people who failed to understand or appreciate his hobbies, but for some reason insisted on and apparently enjoyed showing off his extensive collection to Kim.[1]

Larry has helped Kim and Ron Stoppable during several of their missions.

The first instance of this was to help Ron when he was left to face Monkey Fist by himself when Wade sent a hologram of Kim on the mission without telling Ron. Communicating as a hologram, he told Ron that "in order to defeat your enemy, you have to drink from his fountain," like in their Fortress Game. This told Ron to get some Mystical Monkey Power for himself[1].

The next instance of Larry helping Kim and Ron on a mission was when they needed access to the underground Robot Rumble to meet Vivian Porter. Larry was a member of the Robot Rumble and Kim and Ron used him to gain access to the event. However, he was subsequently expelled from the club for bringing them in[3].

He got to met Queen Bonnie during Homecoming. Ron, quickly got him out of there before she insulted him like she has been insulting all of the guys who attended "Meet The Queen".

The last instance of Larry helping Kim and Ron on a mission was when Professor Dementor kidnapped Larry to try and obtain Kim's supersuit. Although, Larry believed that the entire thing was an elaborate LARP, or live action role-playing, game scenario which Kim setup for his birthday[2].

Larry is an expert or knowledgeable in many stereotypical "nerd" topics such as comic books, science fiction movies and novelizations, fantasy role-playing games, computer games, and robotic fight clubs.

It is not known which side of Kim's family Larry and his mother fall on, maternal or paternal.

June is Larry's overprotective mother, and she believed that he required constant supervision, which is why she always made Kim hang out with him. Oddly enough, her fears were validated when Larry temporarily joined forces with Professor Dementor[2].

James Possible is Larry's uncle. He considered family connections very important, and was usually both the one to nudge Kim into spending time with Larry, as well as the one to defend Larry's image.

Kim, Jim, and Tim Possible are Larry's cousins. None of them wanted to spend any time with him at all, Kim because their interests did not match up, and the twins because they considered him weird. Jim and Tim voiced their disinterest in spending time with Larry, only to be reprimanded by their father to not mock family. Kim secretly agreed, and while she did not voice this to her parents, complained at length to Ron.[1]

Larry was shown to play role-playing games at the local comic shop and to be pretty popular with several of the customers there, including Ned from Bueno Nacho[2].

Ron has also said that he chatted with Larry from time to time and considered spending time with Larry to be fun[2].

Larry had a rivalry with Charlotte, a regular at the local comic shop. Although later he was seen going to the movies with her, but being rebuked when he tried to put his arm around her[2].

Larry was also very interested in meeting Bonnie Rockwaller, because she bore a strong resemblance to his favorite queen, Eudalia of the planet Groknos.

Larry is voiced by Brian Posehn.

Larry is one of the few characters whose age is stated in the show. In the season four episode Larry's Birthday he is stated to be nineteen years old.

Retrieved from "https://kimpossible.fandom.com/wiki/Larry?oldid=32127"
Community content is available under CC-BY-SA unless otherwise noted.