Jim and Tim take over Middleton Mad Dog duties at the high school, much to the dislike of Ron. Dr. Drakken is finally broken out of prison by a nine-foot alien woman named Warmonga, who believes him to be The Great Blue.

This episode begins at the cheerleaders' practice, where Ron Stoppable interrupts the practice to announce that, due to his duties as running back for the Middleton Mad Dogs, the team mascot (his former role) has been forced to retire. While Kim tries to console Ron on the loss, Bonnie instead takes Ron's attention to the field, where Jim and Tim Possible are practicing their routine as the new "Middleton Pep Puppies". Needless to say, Ron's not happy at the thought of the Tweebs taking over the new mascots.

Meanwhile, over in prison, Dr. Drakken is still trying to tolerate his cellmate Frugal Lucre, as the two are playing a game of checkers. Their game is interrupted by a strange green light that breaks through the ceiling and lifts Drakken into the air.

Drakken's escape doesn't go unnoticed, for Wade tips Kim off to his break out. Witnesses report sightings of a green-skinned woman at the scene, which Kim immediately assumes to be Shego. Soon Kim and Ron (the latter still griping about the mascot issue) arrive at a spa in Greece, where Shego's trying to enjoy herself. Despite Kim's incessant asking and fighting, Shego honestly has no clue as to Drakken's escape, and was nowhere near the prison at the time.

As it turns out, Drakken's releaser isn't anyone he knows or even of this planet. The culprit's an alien warrior named Warmonga, from the planet Lorwardia. She had come to Earth to break Drakken out of prison, for she and her people believe that he's "The Great Blue" who will lead her people to good success. When Drakken asks how she knows it's him, Warmonga reveals the source of her belief: Drakken's ill-fated music video (from Rappin' Drakken). Although sceptical at first, Drakken agrees to Warmonga's help upon hearing of the alien technology at her disposal.

Later, at Kim's house, Ron[s trying to intimidate the Tweebs into doing the mascot job by his rules, but with little success. Kim, however, is trying to figure out exactly who broke Drakken out. At Drakken's old lair, Drakken's utterly appalled at how much disrepair his lair has fallen into in his absence. Warmonga, however, uses her technology to create a newer, more high-tech lair in its place, much to Drakken's glee. While Kim's trying to console Ron on letting the mascot issue go, Drakken and Warmonga get a visit from Shego, who doesn't appreciate being replaced. Despite her skill, Shego is no match for Warmonga and is imprisoned.

Eventually, the scene shifts to the football field, with Kim cheering and blowing a kiss to Ron, Ron running the ball, and, much to Ron's dismay, the fans cheering for the Tweebs. Kim's cheering is cut short when Drakken delivers his newest threat to her via Kimmunicator (with Shego heckling and trying to get Warmonga to do the same). Seeing as how Ron is needed on the field, Kim decides to go alone. However, Ron's still feeling dejected over the Tweebs stealing his former glory. Kim manages to convince Ron that the Tweebs aren't just cheering for the fans, but for him and his team as well. Ron, feeling better about himself, attempts to share a kiss with her, only for Wade to show up (in person) to deliver Kim's super-suit (now fixed from Dementor's sabotage in Ill Suited, plus with a new stealth camouflage ability).

Kim arrives at Drakken's new and improved lair undetected, thanks to her stealth camo, but quickly learns of Warmonga's might. Kim's nearly beaten to a pulp when Shego blasts through her restraints and begins to fight the delusional alien woman. Between Kim and Shego's combined skill, Warmonga's beaten, and Drakken's new lair collapses almost as quickly as it was built. Before Warmonga can continue the fight, a nearby TV monitor turns on and reveals the "Great Blue", who orders Warmonga to leave Earth (it's really just one of the Tweebs in his mascot outfit, coloured blue). Disgusted as how Drakken lied to her, Warmonga throws Drakken out to sea and flies away.

As the dust settles, Kim wonders how the others learned about Warmonga. Shego provides the answer by tossing Kim her Kimmunicator. Turns out, Shego tipped off Wade to the situation, which allowed him to work out a plan with the Tweebs. Desiring to get back to her vacation, Shego leaves, but warns Kim that they'll meet again. But Kim's not afraid.

As the sun sets on the football field, Ron acknowledges the Tweebs as worthy successors to the Middleton Mad Dog and hands them a can of banana cream foam, which he used in his old suit as a gimmick. With everything set correctly, Kim and Ron walk off into the sunset, hand in hand.

Kim: "(to Ron) Sounds out of this world"

Warmonga: (throws Shego Through Flat Screen TV)
Dr Drakken: "(embarrassed) Ugh, this is why we cant have nice things…"

Shego: Don’t get too chummy, cup cake. I want to get back to the spa. Midas has the, uh, golden touch. But, next time, you’re mine.
Kim: We’ll see about that.

Motor Ed: When I say this ride rocked, I mean it rocked heavy metal! Seriously! Now dude we're talking V-8 engine, dual overhead cam shafts, three hundred eighty five horse power under the hood! Yaaaaaaaaaaaaaaaa–Yaaa! Heh, Heh! You know what I am saying?
Frugal Lucre: Nooooo! I have no idea what you're saying! You just go on and on and on and on and on about things that nobody even cares about!
Motor Ed: Dude, you're hashing my prison mellow here! Seriously!
Frugal Lucre: And would you stop saying that word?! Ach! Totally clueless! Seriously! 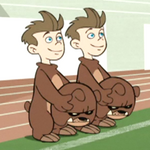 Captive Shego
Add a photo to this gallery

Retrieved from "https://kimpossible.fandom.com/wiki/Mad_Dogs_and_Aliens?oldid=35479"
Community content is available under CC-BY-SA unless otherwise noted.