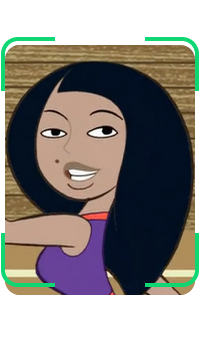 Marcella is one of several cheerleaders at Middleton High School. She has appeared in all seasons, but usually, only with the other cheerleaders. She is often seen either directly next to, or counterpoint, to Liz, even when they are not in routines, indicating that Liz may be her closest friend on the squad.

Marcella has long straight black hair, light brown skin, and black eyes. She also has a mole on her cheek. When not in her cheer outfit, she normally wears a burnt orange long-sleeved shirt, slightly darker pants, and brown shoes.

Retrieved from "https://kimpossible.fandom.com/wiki/Marcella?oldid=36313"
Community content is available under CC-BY-SA unless otherwise noted.