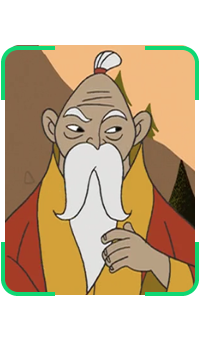 Master Sensei is the head teacher of the Yamanouchi Ninja School.[1]

Master Sensei always gave the impression of being composed and confident, in both his actions and his thoughts. It was rare that he ever displayed any emotion that might be considered disruptive, lacking honor, or unworthy of his role as Yamanouchi's head teacher. Despite this, he was still able to form strong bonds with some of his students, who typically seemed to consider him a second father figure in their lives, and depended on his wisdom for guidance.

Master Sensei arranged for Ron Stoppable and Rufus to come to the Yamanouchi Ninja School in Japan through a student exchange program, with Hirotaka being sent to Middleton High School. Ron did not have much success with ninja training, but Rufus excelled. Master Sensei revealed that Ron had been chosen because he had Mystical Monkey Power, and because he was connected by destiny to the Lotus Blade, a magical shape-shifting sword that only those with the power could wield. Master Sensei's words were proven true, as Ron was instrumental in retrieving the Lotus Blade from Monkey Fist, who had tried to steal it with the help of Fukushima, a rogue student. Though from then on Ron was considered a warrior hero at Yamanouchi, Master Sensei asked him not to reveal the school's true nature to anyone.[1]

DNAmy later kidnapped Master Sensei and framed Monkey Fist for the crime, knowing that Team Possible would lead her to Monkey Fist. Master Sensei tried to use astral projection to warn Ron to stay away, but Yori went to Ron for help in safely rescuing her teacher, and Kim Possible followed them because of her suspicions about Yori. DNAmy captured them all and released them once she had Monkey Fist, but Kim and Master Sensei chose to save him. Once DNAmy revealed herself and announced her romantic intentions toward Monkey Fist, Master Sensei and Yori left him to his fate and returned to Yamanouchi.[2]

Master Sensei arranged for Hana, a baby prophesied to be the Monkey Mystic Weapon, to be adopted by the Stoppable family.[3] His hope was that Ron would care for and train Hana in preparation for her destined encounter with Yono, her dark counterpart that was eventually summoned by Monkey Fist. Yono destroyed the Yamanouchi school and defeated all those who stood against him. But true to the prophecy's words, loving the Weapon indeed made it unstoppable: Hana survived the encounter without a scratch, Monkey Fist was turned to stone, and Yono simply vanished.[4]

On the day of Ron's graduation from high school, Master Sensei used astral projection to warn him of an approaching threat, but assured Ron that he was ready for the challenge. Ron misunderstood his warnings however.[5] During the final battle with Warhok and Warmonga, Sensei appeared to Ron to tell him to summon the Mystical Monkey Power to defeat the villains. Sensei finally informed Ron that he was the Monkey Master, it was his destiny and he was ready for it. Emboldened by Sensei's words, Ron taps into his powers and defeat the aliens. Sensei watches the fight and comments "his Monkey Power is strong. Boo yah."[6]

Master Sensei possessed far more speed and physical strength than his appearance would first suggest. His expertise in martial arts allowed him to engage much larger opponents, such as DNAmy's samurai apes, with obvious ease and great confidence. He also displayed a range of mystical abilities, including levitating himself, communicating via astral projection[2], and producing a powerful mystical aura that dissolved into flower petals and knocked enemies back several feet.[4]

While he appeared to care for all of his students, Master Sensei had a stronger fondness for Ron Stoppable. Some of this could be because Ron required far more guidance than other students, or because he had a destiny far greater than others[1], and therefore had a greater need for a teacher. Still, the two had a mutual bond of deep respect[2], and it could be said that Ron looked up to Master Sensei more than he did his own father. That Ron was entrusted with Hana's care and training, despite having not been informed of the intent, was a clear sign of Master Sensei's great faith in him.[3] One of the few aware of Ron's destiny as the Ultimate Monkey Master, Master Sensei initially hid this fact from the young man, likely waiting until he knew Ron was ready for the knowledge, though he hinted at it during Ron's graduation. Ron simply thought that Master Sensei was trying to offer him advice on Ron's nerves and Dr. Drakken's flower plot and though appreciative, misunderstood Master Sensei's intent.[5] When the time came, it was Master Sensei who informed Ron of the truth, inspiring his student to embrace his destiny and use his Mystical Monkey Power to defeat Warhok and Warmonga. Master Sensei watched the battle with obvious pride in Ron, going so far as to become one of the to use Ron's catchphrase.[6]

Yori was rarely ever far from Master Sensei's side. Of all his students, she seemed to be the one he trusted the most. Though not one for frequent displays of emotion, he admitted to being saddened when Yori was taken prisoner by Monkey Fist.[1]

Perhaps because Rufus advanced so quickly through his training at Yamanouchi, he was also able to earn Master Sensei's respect. Like Ron, Rufus cared greatly for his teacher, and would not hesitate to defend or assist him in battle.[2]

Master Sensei did not actively hate or even dislike anyone. He did, however, take any and all clear threats to himself, his students, and his school seriously. As such, he was always prepared to guard against Monkey Fist's repeated attacks on the school. Despite this, he held no personal grudge and was still willing to protect Monkey Fist from DNAmy's attempt to capture him, at least until her true intent was known.[2]

"You are the Monkey Master."

Sensei was voiced by George Takei.

Retrieved from "https://kimpossible.fandom.com/wiki/Master_Sensei?oldid=36329"
Community content is available under CC-BY-SA unless otherwise noted.