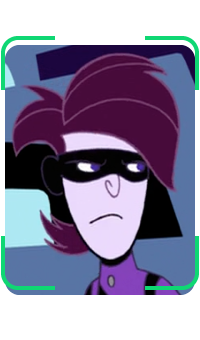 Mego is the brother of Shego and one of the members of Team Go. His power in Team Go is a reference to the Mego action figure; he can shrink to the size of an action figure.

As referenced in his name, Mego is very self-centered and generally acts in concern for himself more than others. Otherwise, he seems to go along with Hego and the rest of Team Go more out of boredom than actual heroic interests. He also tends to be resilient towards authority, often complaining about the leadership he is under.

Mego is somewhat lanky and rather skinny, but stands slightly shorter than Hego. Mego has dark purple hair, eyes, and light purple skin (in costume; his tone out of costume has yet to be seen), with his hair is worn in a messy ponytail mullet. His suit colours are black and purple with the same black mask type as worn by Hego and the twins.

How he looks in his civilian clothing has not been determined, unlike Hego and Shego who have both appeared outside of their costumes.

Mego's relationship with his older brother is somewhat akin to that of the relationship between Drakken and Shego. Mego often lampoons Hego's (cliche) heroic attitudes with dry sarcasm and a biting wit, referring to him as a 'big dolt' frequently.

His relationship with Shego is generally untouched, though he (unlike Hego) was able to understand that Shego had crossed the line to villainy.

Mego seems to have the best relationship with the twins, being seen talking amiably with them in the aftermath of the events of Go Team Go.

Mego is distant towards Kim, often referring to her as 'bossy' and not appreciating her take-charge attitude when working with Team Go. He does not interact with her very often. 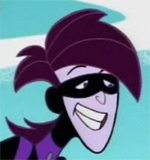 Mego was voiced by Jere Burns.

Retrieved from "https://kimpossible.fandom.com/wiki/Mego?oldid=35660"
Community content is available under CC-BY-SA unless otherwise noted.