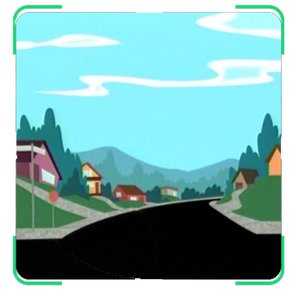 Middleton is the hometown in which Kim Possible and Ron Stoppable live, work, and go to school. Almost every adventure includes at least one scene somewhere in Middleton. Most of the frequently re-visited locations are inside its borders.

It is referred to as one of three cities in the Tri-City area. The other two being Upperton and Lowerton.

Most scenes of Middleton are those of a quiet, suburban town, although other scenes show it to also have an active urban area with a large population base, an extensive infrastructure, and considerable cultural amenities.

In the original Series Bible Middleton is described as being a modern, planned community in the new urban utopian mold. Parkways, porches and picket-fences define the landscape.

The precise geographical location of Middleton is never explicitly stated, but the majority of available canonical evidence points to it being somewhere in Colorado.

During Team Possible's second encounter with Senor Senior, Senior he displayed a multi-state map centered on Middleton. The middle of the map is in the general vicinity of the real world location of Denver, Colorado[1].

When Kim dons the speed shoes to fight the returned Bebes she ends up in San Francisco and notes that she was a thousand miles from Middleton. Which is almost exactly how far it is from San Francisco to Denver, Colorado[2].

When Kim and Ron accidentally left Rufus in Greece after a mission they state that their commercial flight took twelve hours[3]. Given that the typical transoceanic commercial aircraft travels at an average speed of about 500 to 550 miles per hour, then that means that Middleton is about 6000 to 6600 miles from Athens. Denver, Colorado is about 6200 miles from Athens, Greece.

Geological and meteorological clues, while inconclusive, seem to support the Colorado location. Middleton is shown to be near both arid, desert-like environments [citation needed] as well as greener hill country and snow-covered mountains. A variety of landscapes that are found in and near Colorado.

It is highly likely the ambiguity is intentional. Series director Steve Loter has stated that Middleton "is Anywhere USA. It's not based on a real place" [citation needed] , which allows the city to portray a typical locale anywhere in the majority of the American states. This is also used for Go City.

Downtown Middleton at night.
Add a photo to this gallery

Retrieved from "https://kimpossible.fandom.com/wiki/Middleton?oldid=32137"
Community content is available under CC-BY-SA unless otherwise noted.