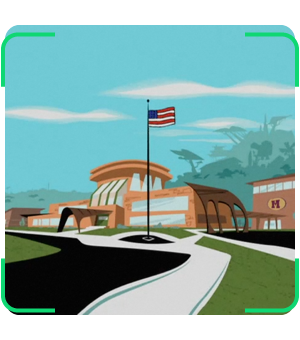 Middleton High School is the only known high school in Middleton and is the high school that Kim and Ron attended for the entire series and graduated from in the series finale. It's also part of the Middleton Unified School District.

The school mascot is the Mad Dog, brought to life by Ron during his sophomore and junior years.[1] In his senior year, after Ron makes the football team as the new running back, Kim's younger brothers Jim and Tim take over as new mascots called the Pep Puppies.[2]

Middleton High School is located in Middleton within walking distance of both the Possible house and the Stoppable House, although from the many school buses seen, the school district seems to be extensive.

Middleton High School has stairs as well as ramps and elevators for the handicapped. However, Felix Renton, the only known handicapped student, does not actually require their use because of his cyber-robotic wheelchair, which can fly.[3]

MHS entrance
Add a photo to this gallery

However, by the time Kim, Ron, and Monique became Seniors[5] and prepared to eat they discover that the table had been discontinued. Mr. Barkin explained that the budget for the Senior Table had been cut to pay for the S.K.I.P. Program,[6] meaning the Seniors have to go back to mystery meat.

The Middleton High School competitive teams have a rivalry with the Lowerton Lemurs. Competitions between these two schools are always heated.

Only a few teachers are actually seen aside from Steve Barkin. Although several names are mentioned.

Math teacher
Add a photo to this gallery

It is unknown exactly how big the Middleton High School's student body is.

During the election for class president during Kim and Ron's sophomore year there were exactly 1000 votes cast (998 for Wally and 2 for Kim)[33].

During Kim and Ron's graduation ceremony, there were 250 seats for graduates setup[34].

Girls in Red and Blue

Newspaper editor
Add a photo to this gallery

Retrieved from "https://kimpossible.fandom.com/wiki/Middleton_High_School?oldid=35638"
Community content is available under CC-BY-SA unless otherwise noted.