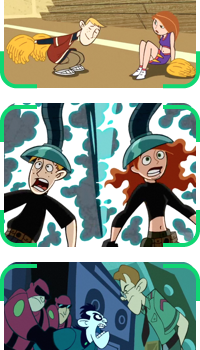 Drakken stole a Brain-Switch Machine which was the cause of Kim and Ron to switching brains. They must then contended with each other's lives while trying to find a way to switch back. They also need to try to foil Drakken's latest scheme of using the military's stolen Neutronalizer to make the world bow to him.

The Middleton Cheer squad was practicing for the Regional Cheer Finals, happening the next day. As Kim backed up, she crashed into Tara. Bonnie then criticized her for picking such a hard, "fussy" routine. Kim pointed out the routine would win them the competition. Just as they began again, Ron rushed in to let Kim know she had a surprising call for help on the Kimmunicator: a live feed from Dr. Drakken.

Completely weirded out, Kim asked why Drakken called her only to find out it was actually a Private Cleotus Dobbs, a member of the United States Armed forces Ron suggested he was Drakken's evil twin, but Kim pointed out Drakken was already evil. Dobbs explained Drakken captured him and used a Brain Switch Machine, leaving Drakken in his body. Before they got further, the signal was lost, his last word was about the mean woman coming. Wade tried to reestablish contact.

Later in the hallway, Kim complained how she had to deal with both the Cheer Finals and Drakken. Ron was confident Kim could handle it easy and Kim said her life is not as easy as Ron thought.

Kim opened her locker to Wade informing her had yet to regain contact with Private Dobbs but he had managed to pull up his unclassified ID card. Seeing what he looked like, they wondered why Drakken would want to be in that body.

Meanwhile, Kim also pointed out she had extra duties with Tutoring, Swim Team, and the Yearbook Committee, which Ron equated as having a social life, which he lacked. Wade informed them he traced the call from Dobbs; the signal originated from the middle of the Grand Canyon. Kim and Ron got help through the Grand Canyon from Baxter. During the trip, Ron ends up angering his donkey which threw him off. Even trading rides with Baxter, Buttercup also threw him as well.

Kim and Ron found Drakken's newest lair which appears as a dilapidated house, causing Ron to question whether or not it is in fact Drakken's lair. Once inside, by means of his "dumb skills", Ron discovered the switch to reveal a hidden elevator down into the actual lair. They discussed how after a while lairs begin to look alike. Moving past a huge machine which Ron correctly identifies as the Brain Switcher, they headed to a series of crates, unaware Shego a bunch of henchmen were watching. Hearing Dobbs calling out for help, they they used a scanning feature of the Kimmunicator to search each crate until finding, and freeing, Dobbs.

Shego hopped up on other crates before leaping into battle.

During the fight and their effort to exit the lair with Dobbs, Kim and Ron ended up in the activated Brain Switcher and end up in switched bodies before they could escape.

Later, at the Possible's home, the family was eating dinner were wary of the situation of what looked liked Kim's arch-foe, Drakken, at the table. Wade then called to reported something big and top secret had been stolen from Dobbs' post, and Dobbs accidentally blurted the name "Neutronalizer" and they were not supposed to hear that and as they were all so nice, he would refrain from killing them for knowing about it. Wade also found Drakken's lair as and the Brain Switch Machine taken away. Kim becomes scared that they're now stuck like this, but Ron is somewhat happy since he/she's now gonna be popular.

Meanwhile, Drakken had moved to a Timeshare Lair. He told the movers to setup the Brain Switcher before he learned the truck was empty and his body nowhere in sight. Shego ultimately admitted Team Possible had it and Dobbs.

Meanwhile, Wade kept scanning for any clues as to where Drakken had gone and Kim-as-Ron offered Dobbs to stay at her house for safekeeping. Wade asked Kim and Ron would do. Kim was determined to deal with the situation until the Brain Switcher could be located.

The next day, Kim attempted to teach Ron-in-her-body a routine the cheer squad was performing for the Regionals later, but Ron remarks there was no way he could do it. The two of them practice for awhile and Ron gets nowhere while Kim continues to do it perfectly even in Ron's body.

Later, Kim-in-Ron's-body encountered some of the bad aspects of Ron's life, including bullying from the football jocks and the bullies from D-Hall expecting money.

Meanwhile, Ron was happy being Kim until the yearbook committee pressured about on a font for the yearbook cover, a teacher asked about tutoring at the middle school the next week, another teacher wondering about the promised painted banners with a Monday deadline, and Bonnie saying it was time to get makeup and hair ready before the Regionals.

Ron quickly asked if Wade found Drakken as Kim smugly asks if there was any problems. Ron said no, asking same of Kim. She wallowed in the low expectations of being him. The cheer squad then shows up and pushes Ron/Kim toward the locker room for the Regionals.

Kim and Ron are both worried as the Regionals start and Middleton is first. Ron begins to mess up the routine, so Kim pushes him out of the way and takes over, much to Bonnie's shock.

Meanwhile, Drakken prepares the Neutronalizer and says that it's time for his ultimatum, causing Shego to laugh as his voice with Dobbs' body is not the kind of thing someone would take seriously. Drakken then uses a very poor puppet resembling his old body to deliver the ultimatum asking the world to declare him supreme ruler of Earth or he will neutronalize a different major city every hour on the hour. Shego then asks what neutronalize means, and Drakken admits he has no idea and that he took it because it the military had it and it was top secret.

Meanwhile, Kim (in Ron's body) does the routine perfectly pleasing everyone. Wade then calls and says he found Drakken in a new Timeshare Lair complex, suite 7B. Kim, Ron, and Dobbs sneak in and hear Drakken angry at the world for not listening to his ultimatum, which Shego smugly points out may have had something to do with the puppet, making him angry. Drakken then prepares to use the Neutronalizer to destroy Paris Kim says she and Ron will create a distraction while Dobbs disarms the Neutronalizer, but this makes Ron angry as he was still a distraction despite having this change to be Kim. Dobbs then admits that he only guarded the Neutronalizer and has no idea how to disarm it, causing Kim to have to think of a new plan.

They don't get the change however as Drakken and Shego heard them and blast way their hiding place. Drakken the talks to Kim (in Ron's body) saying that she/he's finished. Ron tries to say that he/she is Kim, but Drakken says he already knows about the switch. Kim says not to insult Ron and admits that Ron has it pretty hard, while Ron admits that Kim has a lot of pressure on her life. Drakken becomes tired of this and orders his henchmen to finish off Kim and Ron. Two henchmen then grab Dobb's and Drakken angrily says that he wants his body back, to which Dobbs says he can have it due to it being ugly and itchy.

Despite Kim and Ron's effort, Shego knocks down a series of shelves which temporarily taps them. Shego then activates the Brain Switch Machine causing Drakken and Dobbs to get back their bodies much to their relief. As Dobbs is dragged away, Drakken orders Shego to initiate the Neutronalizer firing sequence, to which she complies. Drakken's plan is thwarted however when the fuse box blows up due to the Brain Switch Machine using all the power. Wade calls the Kimmunicator and Drakken answers it. Wade says that the army is on the way, much to Drakken's anger. Drakken then decides to blow up the lair, much to Kim and Ron's shock, and leaves with Shego and his henchmen. Dobbs frees Kim and Ron and Wade says that the Tri-lithium core battery for the Kimmunicator may have enough power to power the Brain Switch Machine. Kim and Ron use it and Kim ends up in her body again, but Ron and Rufus accidentally switch brains. The two of them switch back and the four of them are able to escape the lair before it blows up. Ron says that they may have just neutronalized the Nuetronalizer, but it emerges from the rubble unscathed with Dobbs saying that it is indestructible.

Later at school, Kim and Ron feel great being themselves again, but they accidentally walk down D-Hall where the two bullies call Ron out. Much to Ron's surprise, the larger one gives Ron back his lunch money that he's been holding since Kindergarten, and the smaller one gives him a new video game. Ron is confused, until Kim explains that while she was still in his body, she went back to D-Hall and gave the bullies some sensitivity training. Ron then smiles at Kim for being such a good friend as the episode ends.

Shego: What does "neutronalize" mean, anyway?

Drakken: I have no idea. But the military had it, it was top secret--that's good enough for me.

Dr. Ann Possible: (to Kim in Ron's body) I hear you honey, but as a certified neurosurgeon, I've got to say, it's just not possible to swap brains.

Ron (in Kim's body): Point taken Doctor P, but how else do you explain my bare midriff?