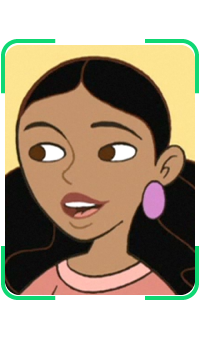 Monique is Kim Possible's closest female friend and confidante. She serves as a conversation friend for subjects that Ron has no interest in or knowledge of. Monique has a no-nonsense attitude, a good eye for fashion, and a good heart. Her surname has never been revealed, probably as a nod to her voice actress, Raven-Symoné, who is generally known by just her first name.

The character’s design has evolved through the seasons, with the most notable change being to her eyes. In Season 1, when she first met Kim, she had small pupils, but starting from Season 2, her eyes became wider and fuller.

Monique is responsible, down-to-earth, and very fashion conscious. She is a highly loyal friend to Kim and Ron, to the point where she will occasionally force them to address their own personality flaws, especially if she considers such traits to be self-damaging or unattractive. She has lost her patience with Ron several times, as his habitual laziness or deviation from the norm sometimes puts Kim or Monique herself in less than desirable situations.

Nothing is known about Monique's life before she moved to Middleton and transferred to Middleton High School. Kim met her at Club Banana in the Middleton Mall, which is their favorite store, and Monique gets promoted to assistant manager in Fashion Victim.

No member of Monique's family was ever actually seen. She mentioned an older brother as the one who got her hooked on professional wrestling[1] and that their father likes to play golf.[2]. Monique never talked about her mother.

Monique was unique among Kim's friends in that she was the one Kim usually chose to discuss her own personal and social challenges with, such as managing a crush on a boy, dealing with Bonnie's latest insults, or overcoming her jealousy when Ron made a new friend. As a result, Monique was often in a position to help Kim through her most vulnerable and insecure moments, which Ron was either unavailable for or unsuited to help with. When Kim begins to overreact to or misread a situation, Monique will not hesitate to confront Kim and correct her behavior.

Monique was fond of and friendly with Ron Stoppable, although he regularly found ways, unintentional or otherwise, to annoy or disgust her. They shared a common interest in professional wrestling. However, while Monique enjoyed Bueno Nacho food, she did not eat there nearly as often as Ron did.

Monique appeared to dislike Bonnie Rockwaller, Kim's archrival, both because of her snobbish attitude and the way Bonnie frequently insulted Kim. However, it should be noted that there did not seem to be any truly personal grudge between the two. Bonnie did not appear to specifically dislike Monique despite her being a close friend of Kim's, and in many cases Monique's advice for Kim on dealing with Bonnie was simply to ignore her taunts.

Romantically, Monique has a lot of first dates. She describes herself as unable to maintain a relationship,and seemingly seeks a stable relationship with a young man who isn't a total weenie. She was seen getting friendly with Brick Flagg at the end of the Junior prom, but nothing came of it, as he graduated later that year. She recently had to spurn the advances of a smitten Wade, who was rejected because of his age and his decision to use emotion-manipulation on her. Ned is apparently interested, but she's not.

Monique's chief talent appeared to be her considerable fashion design ability, which proved to be on par with that of The Fashionistas. Combined with her love of shopping, she was able to obtain a job at the Club Banana in Middleton Mall, recruited Kim to work there as well, and was eventually promoted to assistant manager.

In her first disastrous attempt to stand in for Ron on Team Possible, Monique proved that she was largely unsuited for mission work at the time: she was as bad or worse than Ron at handling Kim's usual travel methods, and appeared to have no combat ability whatsoever. Monique acknowledged all of this beforehand, but went along only at Kim's insistence that she required a partner with Ron stuck in Norway.[2]

Monique once joked that she would need about twenty years of training to be of any use to Team Possible on a mission.[2] She actually did this, in the timeline where Shego took over the world via the Tempus Simia. With Club Banana converted to Club Shego and all outfit choices limited to Shego's signature catsuit, Monique needed a hobby other than shopping, and decided to focus on combat training. She joined the Shegoton resistance force and became a highly skilled combatant.[3]

Retrieved from "https://kimpossible.fandom.com/wiki/Monique?oldid=34462"
Community content is available under CC-BY-SA unless otherwise noted.