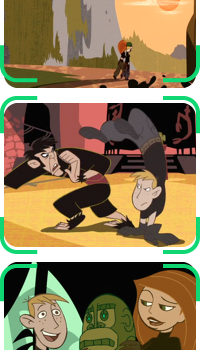 We find Kim and Ron climbing a mountain. Ron does not get very far until he is tangled up in his bungee cords. Kim reaches the top to find a baby eagle that was wounded. She rescues the eagle but on her climb down, her ropes break and she finds herself free-falling down the cliff. Using her pack as a parachute, she is able to land safely and give the baby eagle to a park ranger.

Kim's father contacts her on the Kimmunicator asking where she is as it is family game night. The park ranger tells him that he should be proud of his daughter for the good work she's done. Kim's dad lightens up but tell her that her cousin Larry will be disappointed she's not there. After hanging up, Kim expresses relief at not having to be there, telling the park ranger that Larry is really creepy. Ron, after freeing himself from the ropes, asks her what's so bad about her cousin.

She then goes on to tell him for quite a while on how Larry is essentially a major gamer geek. Ron doesn't seem to take Kim's side but instead goes on about one of the games that Larry plays called "Fortress", and how cool it was. Wade then appears via hologram. He explains to Kim that the famous archeologist Monty Fiske wants her help to find an artifact. Upon arriving at their destination, Ron is horrified to find that the temple they are searching is a monkey shrine. Kim explains to Monty that Ron had to share a cabin with a wild chimpanzee at camp and ever since has been traumatized. Monty tries to explain chimpanzee's are actually apes and not monkey's, but Ron tells him they're all freaks of nature. Monty appears to be very displeased by Ron's comments. When Ron thinks that Monty is out of ear-range, he tells her that he thinks Monty is no good. Kim thinks that Ron is being ridiculous and when Monty is reveled to have been closer then Ron thought, and he did in fact hear his comment, the tension grows. The team splits up, but Ron refuses to go inside the shrine. Kim goes alone, having to avoid numerous boobie-traps to achieve the old monkey artifact.

That night, Ron insists that he still thinks Monty is no good. Kim still doesn't take him seriously, and tries to sleep as Ron tries to inform her of a figure he sees in the distance. At first he thinks it's a monkey, but is relieved when it's only a ninja. The ninja steals the monkey artifact despite Kim putting up a fight for it. When she informs Monty of the loss, he acts upset but it seems off.

Back at home, Kim's dad tries to cheer her up by saying that Larry felt bad for not getting to see her, so his mother invited the family over for dinner that Saturday. Kim's twin brothers go on about how Larry is a dweeb, but James scolds them for it. He tells them to be more like Kim who doesn't judge a book by its cover. Kim get's a guilty look on her face. The next scene, Kim and Ron are at Bueno Nacho. Kim describes her misfortune at having to spend dinner with Larry, but Ron still doesn't see what's wrong with him. Wade then calls Kim and tells her that the monkey artifact was legend to be able to grant people Tai Shing Pek Kwar, or Monkey Kung-Fu when combined with three other artifacts just like it. Wade thinks that it would be a good idea for them to talk to Monty again, who may be able to help them get the artifact back. Kim remembers that she had plans with Larry though and insists on honoring her promise with her dad that she wouldn't bail, despite Wade offering her a holographic version of herself to fill in. She does note how tempting the Holo-Kim was.

That Saturday night, Kim and Ron go to ask Monty for help, thus having the Holo-Kim take her place at her cousins house. When shown inside, Monty reveals to them that he was in fact the ninja that stole the artifact, and that he had the other three as well. He also revealed to be crazy in the sense that he spent his family fortune on getting his hands and feet mutated to make him part man part monkey. He tells the duo that since they know his secret, he'll have to kill them. When he attacks Kim, he shoots right past her, revealing that Kim actually did go to her cousin's house and Ron was left with the Holo-Kim. Ron tries to escape from Monty as Wade calls Kim to let her know what is going on. Shocked and helpless to assist Ron, Kim allows Larry to speak to her friend. Larry encourages Ron to defeat Monty like he would with a certain boss in Fortress, by becoming like him. Ron runs to the four artifacts and "becomes what he fears most." He is imbued with the same power, and so is Rufus, who was caught in the energy too.

Now having the powers of Tai Shing Pek Kwar, Ron is able to put up a good fight against Monty. However Ron's instinctive knowledge is eventually edged out by Monty's physical master training. Just when it seems Monty has Ron defeated, Rufus starts to knock over the monkey artifacts, after Ron orders him to "Search and Destroy." Desperate, Monty tries to catch them all, barely grabbing the last one to get knocked over with his teeth. He's then helpless as Ron surprises him with a kung-fu kick to the face, knocking him out and breaking the artifacts. The police come and Ron is able to go to Larry's house, where the two get along talking about video games. Kim smiles and finding that Larry now has a friend, bails while the two watch deleted scenes from a sci-fi movie.

Usual casual outfit.
Add a photo to this gallery

Ron in his blue pajamas.

In his usual casual outfit.

Usual mission outfit along with backpack.

Sleeping bag burrito.
Add a photo to this gallery

Retrieved from "https://kimpossible.fandom.com/wiki/Monkey_Fist_Strikes?oldid=36700"
Community content is available under CC-BY-SA unless otherwise noted.