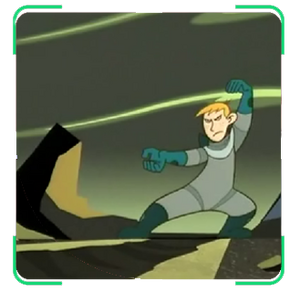 Monkey is presumably one of the styles of martial arts which the Yamanouchi Ninja School teaches to enhance the art of ninjitsu –the Way of the Ninja– apparently along with Mantis Style, which Hirotaka proved to be familiar with in a spar with Kim[2].

For one who has been exposed to Mystical Monkey Power, they are apparently imbued with an innate knowledge of Monkey Kung-Fu without the need to have formally learned it, although they do have to tap into their own Mystical Monkey Power to do so, which is probably not easy. However such an infusion is still not a replacement for formal training, as Ron Stoppable was only able to fend off Lord Fiske for just a couple minutes before being pinned to the ground[3].

The following have all been seen using Monkey Kung-Fu:

Retrieved from "https://kimpossible.fandom.com/wiki/Monkey_Kung-Fu?oldid=33848"
Community content is available under CC-BY-SA unless otherwise noted.