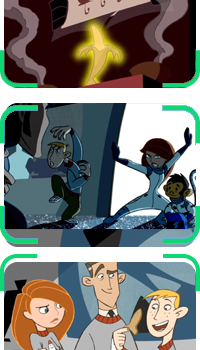 Monkey Fist schemes to fulfill the prophecy of the Golden Banana which will make him "unstoppable". Meanwhile, Kim is forced to tag along with her eager dad and Ron to the annual Rocket Boosters Open House at the Middleton Space Center, despite having long outgrown it.

Monkey Fist longs to fulfill prophecy as foretold by the Mystical Monkey Monk in the Golden Banana. To find the brightest monkey - Frederick - and follow him to the stars where the ultimate Monkey Master will be apparently made "unstoppable". Unfortunately for Monkey Fist it turned out to be a spelling mistake, and what the Monk meant to say was "Ron Stoppable"[1].

Kim has to muster the courage to confront her father about her being too old to continue to join him for the annual Rocket Booster Open Day. Her father is clearly showing signs of denying that his daughter is growing up. But Kim has a chance to prove her maturity to him when she has to go into space with Frederick to save Ron from Monkey Fist. Ron, genuinely eager to join the annual Rocket Booster event has his mind changed when introduced to Frederick - bringing out memories of his monkey trauma. However, he confronts his fears somewhat in space by learning to trust Frederick, despite him being a monkey, and facing off against Monkey Fist using his own Monkey Kung-Fu[1].

Monkey Fist: You heard him. I will be unstoppable! I, the Ultimate Monkey Master will rule the world! Woooyah!

James: I’d like you all to meet the special new addition to our crew, Frederic.

Keith: Hey, how come he uses that box thingy to talk?

James: I think you’ll like this, boys and girls. You see, Frederic isn’t a human astronaut – he’s a...

Kim: Long story short, Ron had a bad summer-camp experience. He didn’t get on with the monkey mascot.

Monkey Fist: And the feet to match.

Monkey Fist: Ooh-hoo! Frederic has came back. Ooh, yes! The prophesy is back on track. I will be the Ultimate Monkey Master.

Kim: Monkey Fist, get a life. (throws her helmet to monkey fist before she doing the pose)

Frederic: “Bring it on.” (they all pose)

Ron: Dude, it’s not happening, get used to it.

Ron: His legion of monkey ninjas. We captured them too.

Frank: Sorry, pal. There are no monkey ninjas on board.

Monkey Fist: I taught them the way of the ninja, and now they abandon me. NOOOOOOOO! (SOBS)

Retrieved from "https://kimpossible.fandom.com/wiki/Monkey_Ninjas_in_Space?oldid=35919"
Community content is available under CC-BY-SA unless otherwise noted.