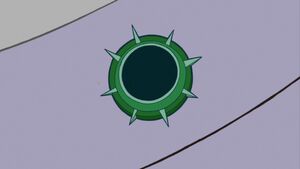 The Moodulator system was a controller device with synced wireless receiver chips created by Dr. Cyrus Bortel as a way to remotely capture and override a person's emotions when attached to their neck. He sought to sell it to the highest bidder.[1]

During a fight in Bortel's lab, Kim Possible and Shego both ended up with a moodulator attached to their necks. As a result, Ron Stoppable and Dr. Drakken were at the unfortunate receiving end of its effects.

Once a moodulator is attached to a person's neck, their personal emotions and feelings can be controlled by the handheld game-like Control Device, triggering the subject wearing a synced receiver to cycle through a series of emotions. However, if cycled too rapidly between emotional states, it can cause the moodulator to burn out and will result in the subject being stuck in the last state set.