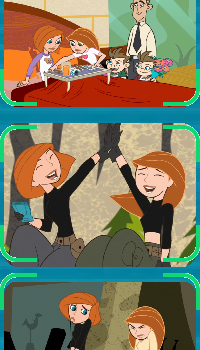 Protect and then recover the world's supply of experimental super-concentrated self-replicating synthoplasma. First at its experimental research facility, and then on a high-speed military train.

Kim attempted to spend Mother's Day with her mother despite their equally busy schedules. While Kim and her mom try to juggle their busy lives, Ron was assigned the overwhelming task of cleaning out the family garage as his Mother's Day gift for Mrs. Stoppable. Meanwhile, Drakken got an unexpected visit from his mother Mama Lipsky, who is under the impression that he is a radio talk show doctor, and that he has not in fact forgotten Mother's Day.

It is Mother's Day, and Kim, Ron, and Wade all make a point to spend time with their moms. Kim and the family surprise Ann with breakfast in bed, a card, and a vase of flowers, replacing the Tweebs original present, mutated bees. However, Mother's Day maybe cut shot because of Ann and Kim's busy schedules. Because it has been a while since Ann and Kim spent some quality mother-daughter time together, Mr. Possible wants them to spend the day together "no matter what". While Kim is spending the day with her mom, Ron is forced by his own mom to clean out the garage and Wade is pampering his mother for the day. Also, Drakken's mother comes to visit him for Mother's Day. Because she has no idea that her son is a supervillain and thinks he is a radio talk show doctor, Drakken has to try and keep his life as an international supervillain a secret from her.

After helping out with a brain-surgery procedure, Kim and Mrs. Possible return home, deciding what to do next in their mother-daughter bonding day. But then Kim gets a call from Wade, who reports that Drakken is trying to steal a batch of Syntho-Plasma. Since Ron is unavailable to help Kim like he normally would, and since Ann and Kim promised each other to spend the day together "no matter what", Ann offers to act as her daughter's sidekick on the mission. Kim, naturally, is reluctant to that idea, not wanting to put her mom in any kind of danger, but after Ann gives her daughter the "puppy dog pout" Kim ultimately agrees to let her act as her sidekick this one time.

Despite a few bumps in the road, one of which was where the syntho-plasma accidentally gets exposed to air and becomes a nonstop-eating monster, Kim and her mom manage to stop Drakken and Shego's scheme and Ann even saves her daughter from getting eaten by the blob monster. After Ann saves Kim, they admit that while it was not the way they originally thought they would spend the day together, they managed to spend it together, no matter what. Later on, Kim and Ron return the syntho-plasma blob monster to the scientists after they have it clean out the Stoppable family's garage.