Start a Wiki
This article is about the villain. You may be looking for the episode, "Motor Ed". 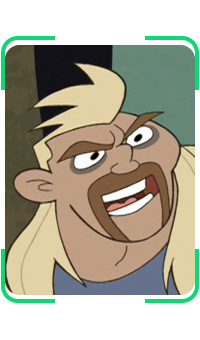 Eddie Lipsky, also known as Motor Ed, is an automotive-themed supervillain, a hard-rocking, car-customizing, mullet-wearing, fast-driving, and narcissistic madman on the road to destruction.

Ed has a long 'mane' of blonde hair in the form of a mullet, a thick mustache very akin to Hulk Hogan, and is very muscular and bulky. He usually wears a blue ripped-sleeved t-shirt, a pair of jeans with a black belt, a pair of black gloves and shoes, dark circles under his eyes, and has a 'ED' Tattoo on his left arm and has hair on his huge biceps.

Wildly unpredictable and uncontrollable; his focus in life is building fast rides, driving fast rides, destroying property, and picking up hot babes. He cares little for laws, morals, or fashion, preferring to set his own style. This set him at odds with his colleagues and lead to his descent into villainy. He also has a habit of becoming obsessed over advanced technology, not forgetting Felix Renton's wheelchair after it was used against him.

He often uses the word "seriously" in a repeated fashion, and has a habit of breaking into air guitar solos when excited.

He will only use equipment from the Planet Tool hardware store franchise.

A brilliant mechanical engineer, and quite sharp as a tactician, despite his lowbrow actions. A good race driver, and a physical powerhouse, but he's no match for Kim Possible or Shego in hand-to-hand combat. His real strength lies in his mechanical skills, as he can hijack and build a wide array of monster machines. All he needs are the right tools and parts, and anything he builds becomes extremely powerful. He is also good at reverse-engineering, as he duplicates the cyber-robotics in Felix's wheelchair into Drakken's Doomvee.

Motor Ed was a mechanical engineer, one of the best in the country, but conflicts with his more professional colleagues over his manner and style, especially his mullet, led to his going rogue at the government facility he worked with. He first encountered Kim, whom he consistently called "Red" because of her hair, Ron Stoppable, and their new friend Felix Renton when he tried to steal parts for the ultimate fleet of custom wheels. He was foiled by a clever ruse centered around a fictional, but cool-sounding, part called the "Turbonic Charger Valve", playing on his love of car technology.

He later joined up with his cousin Dr. Drakken, and his sidekick, Shego, and used cyber-robotic technology reverse-engineered from Felix's wheelchair to enhance Drakken's Doomvee. They were foiled when the heroes exploited a known weakness in the source technology to take control of the Doomvee.

In the early part of Kim's Senior year, as she was having trouble relating to her own car, Ed broke Shego out of jail to join him in an undisclosed scheme, snubbing his cousin on the way out. He stole an experimental spacecraft called the Kepler from the Middleton Space Center, and turned it into a hypersonic dragster. His goal was not to do anything specifically evil, but to simply cruise across the country with a hot babe at hypersonic speed; along with an Alaskan cruise, it was on the list of things he wished to do before he "croaked". Shego, enraged, blew him out of the cab, leaving the unmanned Kepler to be stopped by Kim. Both were subsequently captured.

After his cousin Drakken escaped from prison, Motor Ed was moved into his former cell with Frugal Lucre.

Motor Ed sees his cousin Dr. Drakken as more of a sibling. They actually got along fairly well at first, and bonded over their similar troubles with Team Possible. However, eventually began to bicker repeatedly, especially when it came to the finer details of their plan, such as who got to drive the Doomvee. Though Drakken was supposed to "mentor" Ed, it was actually he who seemed to thrive under Ed's teaching, even defending Ed in front of his mother and taking on some of his odd personality quirks.

Mrs. Lipsky and other members of the Lipsky family consider Motor Ed a black sheep. Upon learning Drakken and Ed had been arrested, she immediately blamed it all on Ed, calling him “a bad seed”.

Prior to his first arrest and release from prison, Motor Ed had a gang of mechanics and lackeys, but they have not been seen since.

Ed has a crush on Shego, saying how he loves "that green magic", referring to her powers and coloration. However, he typically angers her by repeatedly referring to her as a "babe", or suggesting women are not as capable as men at certain tasks. Shego is only willing to tolerate him for the sake of evil plots, but otherwise for the most part cannot stand him.

Team Possible and Felix Renton are on his list of enemies, though more because they insist on getting in his way. Despite his tendency to underestimate women, Motor Ed does not deny Kim's skills, once commenting, "You've gotta respect Red's road skills. She knows how to cruise".

Motor Ed typically wears jeans and a tee shirt with the sleeves torn off. He adds a Kaiser helmet when riding his motorcycle.

He is voiced by John DiMaggio who also voices his cousin, Dr. Drakken.

Ed was created to provide a use for a funny voice John DiMaggio improvised between takes[citation needed], which he based on the motorheads that lived near him growing up in New Jersey. His appearance, especially his facial hair, is partly based on Lemmy Kilmister of the Heavy Metal band Motörhead. DiMaggio can be heard using a not-fully-developed version of the voice for one of the fans ringside in "Pain King vs. Cleopatra".

Retrieved from "https://kimpossible.fandom.com/wiki/Motor_Ed?oldid=35068"
Community content is available under CC-BY-SA unless otherwise noted.