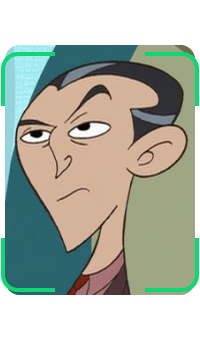 the associate of Upperton millionaire Mr. Paisley and designer of the McHenry Laser Grid, a powerful and lethal laser net that is supposedly impenetrable. He is willing to install one of these grids to anyone who is willing to pay, including both Mr. Paisley and Team Impossible. He has only made one notable appearance, when his client Mr. Paisley accidently set off a laser grid with them in the middle.

Once caught inside, he attempted to contact Team Impossible, citing them as a "super secret commando squad" to Mr. Paisley. However, because he had to type using his foot due to the laser grid, he made a typo and instead called Kim Possible. Although unsure at first given she had only set the site up for babysitting jobs and similar, Kim would prove to be the only one who's been known to be able to successfully navigate the laser grid and disabled it, releasing McHenry and Paisley.

He expressed surprise at the fact Kim was the one who rescued him and his client rather than Team Impossible, but how he took understanding just what had happened is unknown. It is known that he continued to provide McHenry laser grids to anyone willing to buy, as evidenced by Team Impossible's ownership of one. Kim Possible has, to date, been the only one capable of navigating his grids successfully.

Retrieved from "https://kimpossible.fandom.com/wiki/Mr._McHenry?oldid=19734"
Community content is available under CC-BY-SA unless otherwise noted.