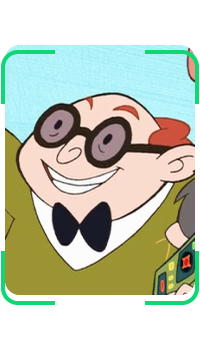 Mr. Paisley is a millionaire in Upperton.

He was also a Cuddle Buddy collector who had the McHenry Laser Grid installed to protect his collection, including his Flamingoat –the rarest of the Cuddle Buddies of which only ten were made. When the Laser Grid was unintentionally activated, Mr. McHenry attempted to contact Team Impossible, a group of heroes-for-hire, via his laptop. A typo, understandably caused by typing with his toe, accidentally yet fortuitously sent the cry for help to Kim Possible instead.

This is notable as it is THE incident which launched her career as a hero.

It should be noted that Paisley and McHenry's lives truly were endangered as the temporary existence of events due to temporal tampering demonstrated. The lasers of the Grid had the power to reduce a giant mystical stone golem ape to rubble within seconds of activation.

Retrieved from "https://kimpossible.fandom.com/wiki/Mr._Paisley?oldid=31005"
Community content is available under CC-BY-SA unless otherwise noted.