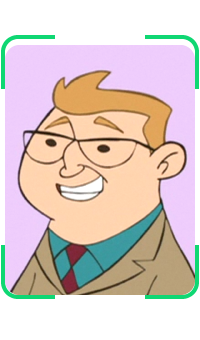 Mr. Stoppable is the father of Ron Stoppable.

It very likely that Mr. Stoppable did not attend his high school prom. Because as of Ron and Kim infiltrating the Bermuda Triangle club Ron stated that the tuxedo his dad bought for his prom had never been worn[2], implying that he had a less successful love life in high school than his son.

He had some good advice, but Ron had already found an instant solution, The Molecular Muscle Enhancer, so he was not ready to listen to his father's sound advice, so he had Rufus take notes on his father's words of wisdom.

He has been named "Actuary Of The Year." This is the episode, when Ron took an interest in his father's work. At first, Ron was more fearful for Kim's own safety, but after Mr. Stoppable pointed out that she "is in no more danger saving the world than the average student is skateboarding to school,"and then calculated Ron's known traits, which he is aware of, "Its a miracle." The calculations showed Ron the "I should have been toast in the tenth grade," which was very instrumental in Ron becoming more paranoid, and even going inside a panic room not too long afterwards.

When Ron was in his panic room, and Rufus intervened, by entering the panic room from the vent at the top of it. The vent came close to landing near Ron. Wade was also calling for Ron's help at this time. Ron was still too fearful to enter the "outside world," until Mr. Stoppable told him, from the ceiling, "Somethings are worth the risk."

When Ron finally called him a "hero," it gave him the confidence that he needed to win.

He is an actuary which allows him to work anywhere.

As an actuary he is a highly skilled mathematician, so much so he was able to overpower the Mathter inside his own invention which converted math into energy.

Ron has mentioned that his dad has allergies to nearly every kind of animal hair or fur[3][4].

While he does seem to genuinely care about his son and what Ron thinks of him, he does not seem to acknowledge or consider his son's thoughts or feelings on matters as being important. Often they make major life changes without telling Ron, leaving him clueless until it's already happened, such as adopting Hana and moving his stuff to the attic[5], not telling him that they were moving to Norway until the day they moved[3], and telling him he was going to Camp Wannaweep only when the bus had come to pick him up[citation needed]. When asked by Ron why they didn't tell him, Mr. Stoppable says, "This is our way of telling you."[3]

"I'm an actuary. I can work anywhere."