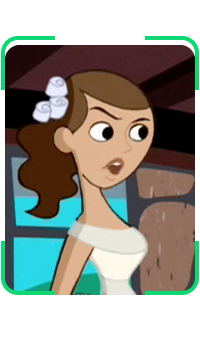 Ron Stoppable was never seen interacting with her directly, but it can be assumed that he would have been very upset to learn that while she was aware of his being seated at the kids' table with his cousin Shaun, she did nothing to prevent this.

Little was known about her relationship with Reuben, other than he cared enough to pull her out of the way of evil Ron's plasma catapult. And that he married her.

Like most brides, she would have no great love for anyone who would dare disrupt her wedding reception. In the case of the first attempt as the reception, that would clearly be Evil Ron.

Mrs. Reuben Stoppable was only seen wearing her wedding dress with white flowers in her hair.[1]

Mrs. Reuben Stoppable
Add a photo to this gallery

She was voiced by Grey Delisle

Retrieved from "https://kimpossible.fandom.com/wiki/Mrs._Reuben_Stoppable?oldid=31106"
Community content is available under CC-BY-SA unless otherwise noted.