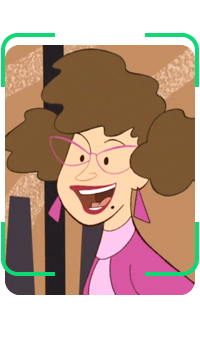 Mrs. Rockwaller was shown to have a very different personality from all three of her daughters, in that she lacked their abrasive attitudes and seemed genuinely gregarious and friendly. She was talkative and seemed somewhat overprotective of her youngest daughter, Bonnie, and was seemingly unaware of her daughter's cold attitude toward others.[1]

The father of the Rockwaller sisters was never seen or mentioned, and Mrs. Rockwaller was the only parent to show up as a chaperone for the class ski trip without a spouse.[1]

Mrs. Rockwaller was also never shown with her oldest daughters, Connie and Lonnie, but she was shown to be a source of consternation and embarrassment for Bonnie. Mrs. Rockwaller's pet names for Bonnie are "Bon-Bon" and "Pumpkin", much to Bonnie's chagrin and Ron's amusement.[1] Since hearing this, Ron has teasingly called her "Bon-Bon" whenever he gets the chance.

Retrieved from "https://kimpossible.fandom.com/wiki/Mrs._Rockwaller?oldid=30818"
Community content is available under CC-BY-SA unless otherwise noted.