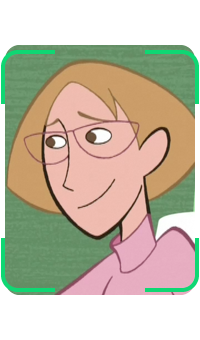 Mrs. Stoppable (voiced by Andrea Martin) is the mother of Ron Stoppable. She is married to Mr. Stoppable, and the adoptive mother to Hana Stoppable. Ron seems to have a tentative relationship with his mother as she seems to be much more controlling. There are hints that she would have rather had a daughter and it has been hinted several times that she and her husband are not the greatest of parents to their son.

She forced him to go to Camp Wannaweep (the source of almost every fear he has) and when he kept calling her to tell her that he wants to go home, she eventually stopped accepting his phone calls. She also has a no-nonsense attitude, which Ron dislikes as it contrasts with his own laid back attitude. According to the plot of "A Sitch in Time", she works in a bank, though given the erasure of that timeline this information is sketchy at best.

Although she has never been seen talking about, with, or to Kim Possible, until season 4, most fans have assumed that she does approve of Ron's friendship with her and her lifestyle as a freelance agent. This has not been addressed in the series as the relationship between Ron and the Possibles, but she doesn't show any signs of disapproval for Ron's participation in missions outside one instance in regards to when he was supposed to clean the garage.

It is unclear, how she will be, when Hana is old enough, but in Ron's case, after there was a paper machete accident, she swore off all of his school projects.

This helped to cause problems, when Ron refused to see his own father as a "hero," and he needed to do a "Hero Report."

She was aware that her husband has joined the Middleton Search And Rescue, but she was probably in the dark, as to why. She voiced these concerns about her husband's erratic behavior to Ron, but he was too concerned with typing his "hero paper" on Hego, at least until it crashed, due to the Mathter's interference.

It is unknown, if she ever found out that Ron was put into a bubble, when he became "Antimatter Boy," or not. She was only seen before her son was completely off the grid, in that episode Mathter and Fervent.

Mrs. Stoppable: Thanks for helping Ron watch Hana. I hope she wasn't too much trouble.

Kim: Oh no. No trouble at all.

Ron: Except for the explosion.

Mrs. Stoppable: Explosion! Did you take your sister on a mission?!

Ron: Right. We took her on one of those. Perfectly safe. Not like a mission. Except for the lasers. (Kim grabbed Ron's arm, and hurried away.)

Retrieved from "https://kimpossible.fandom.com/wiki/Mrs._Stoppable?oldid=31198"
Community content is available under CC-BY-SA unless otherwise noted.