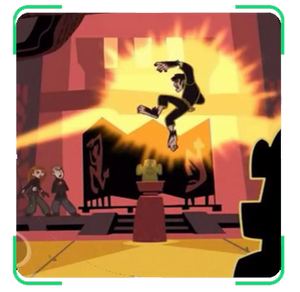 Mystical Monkey Powers is a form of mystical energy emanating from four jade monkey idols which were originally scattered across the world by the Order which once used the statues to enhance their skills, being gifted with an instinctive knowledge of the martial arts of "Tai Shing Pek Kwar" as well as superhuman speed and strength.

Sought after by Lord Monty Fiske, better known as Monkey Fist, the energies have been imbued into three modern day individuals: Monty Fiske, Ron Stoppable and Rufus. With the destruction of the idols, and the existence of more unknown, the possibility of anyone else gaining Mystical Monkey Powers remains unknown.

He may even have tapped into the super-strength in the episode, Gorilla Fist, when he punched the Monkey Statue. This punch, unhid that hidden tree house, and a few minutes later, that statue, began falling on Ron. This could be a sign of him tapping into his dormant mystical monkey power.The Ultimate Monkey Master is much more capable and powerful with his abilities. Upon the manifestation of his powers, Ron became truly unstoppable. He was seen to grasp both Warhok and Warmonga by their wrists simultaneously and launch them well over half a mile into the air to impact with their crashing spaceship, potentially killing them.

There are several artifacts and plot devices that involve the use of Mystical Monkey Powers:

Retrieved from "https://kimpossible.fandom.com/wiki/Mystical_Monkey_Power?oldid=29369"
Community content is available under CC-BY-SA unless otherwise noted.