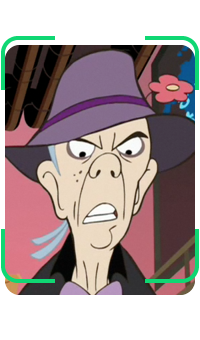 Nanny Maim is a disgruntled, elderly nanny that turned to crime as a way of creating a greater demand for the nanny profession.[1]

Nanny Maim was a very old woman. Ron's initial impression of her, considering that she lived in a old and arguably haunted house, was that she was a zombie.[1]

Nanny Maim was a very stern and old-fashioned woman. She believed in raising equally stern and unpleasant children, as was evident by the primarily malevolent look of all of her babies.[1]

Nanny Maim was able to produce babies as a strong as a full-grown man. She attributed this to proper nanny techniques and firm discipline.[1]

Nanny Maim was once the head of a nanny training academy based in the small, English village of Shireshimshire. She was forced to shut down her school when fewer and fewer of her graduates were being hired, due to the need for families to hire nannies for their children going out of fashion. Nanny Maim decided to prove that her traditional method was the better way. Thanks to a machine that turned adults into babies, she was able to train an army of babies, each one as strong as a grown man, and sent them out to steal pacifiers. Her reasoning was that she could make more money by making babies unhappy initially, so that then a nanny such as her would be needed to make them happy. Nanny Maim's operation ran smoothly for so long because the civilians of Shireshimshire were terrified of her. Her freakishly strong babies roamed the streets, constantly on the lookout for anyone who shared too much information about her. These unfortunate people were forcefully subdued and taken back to the closed academy to become Nanny Maim's newest baby recruits.

Team Possible arrived in England to investigate the worldwide pacifier shortage. Nanny Maim, annoyed by their questions, sent them away, but they returned later on. Ron witnessed a man being turned into a baby, just before they were captured by Nanny Maim's army. Kim convinced Nanny Maim to explain her motives, which gave Rufus time to chew through the ropes binding them. Once free, Kim was able to use her natural babysitting skills to calm the babies, and sent them back through the machine to restore them to their adult forms. Lacking any real combat training, Nanny Maim was easily captured and arrested.[1]

Nanny Maim used a de-aging device to create an army of hench-babies. One reason that she gave for this was that feeding full-sized henchmen would get "pricey".

Nanny Maim's initial dislike of Team Possible was based largely on the fact that she found Ron to be lacking in manners, and also that Kim asked too many questions. Once Kim explained how the villain-hero relationship usually worked, Nanny Maim decided that she found Americans traditions to be odd, and not at all to her liking.[1]

Retrieved from "https://kimpossible.fandom.com/wiki/Nanny_Maim?oldid=31363"
Community content is available under CC-BY-SA unless otherwise noted.