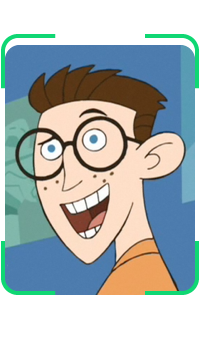 Ned is the manager and generally the only visible staff member at Bueno Nacho #582. He is often caught in the crossfire of Kim's missions when they involve the Middleton Bueno Nacho, but this doesn't seem to impact his relationship with them or convince him to bar them from the restaurant.

Ned has been manager at Bueno Nacho in Middleton since before season 1. He was briefly usurped twice, first by Ron Stoppable, then by Dr. Drakken's henchman Lars.

In the first case, Ron had been signed up by Kim for a job in Bueno Nacho. Ron quickly exceled in the job and took over for him, putting Ned through much of what Ned had done to Kim in the same job. When Kim was in need of help, Ned confronted Ron and asked what Ron would be: an assistant manager or a wannabe sidekick. The two faced off, but Ron eventually walked away. Since then, Ned returned to his position without incident.

In the case of Lars, he was the first one to notice that something was going horribly wrong with Bueno Nacho, and not just expected corporate change. He conferred these details to Ron once Lars replaced him, hoping that Ron would catch on and use his mission expertise to find out if its anything sinister. Eventually he tried to get Ron (suffering from heartbreak due to Eric wooing Kim) to realize it by painting "EVIL" onto his tray with Diablo Sauce. Ned would flee the march of the Diablo toys from the restaurant and was not spotted for the rest of the Lil Diablo incident, but returned to his position as Assistant Manager afterwards.

Ned is often caught in the crossfire of villainous schemes, especially when Bueno Nacho is involved. To date, he's witness its roof be destroyed multiple times ("Tick Tick Tick", "Ill-Suited", "Grande Size Me"), attacked by clones ("Kimmination Nation"), wrecked by a giant monster ("Partners"), and presumably witnessed its destruction in "Graduation". Presumably he survived or was not present within, but he was not seen for the duration of the events or afterwards. He does not seem to draw the connection that this destruction is often a result of Kim and Ron's missions and never seems to comment on that fact.

Seemingly friends with his best customer Ron Stoppable, despite their past conflicts in "Bueno Nacho". He's an attendee of the Robot Rumble, along with Larry and Justine Flanner. Its unknown if he has mechanical genius or simply watches, but presumably he simply watches given he hasn't shown mechanical talent to use or maintain robotics.

In regards to Larry, he seems to be a good friend and the two are both part of an RPG club in Middleton and knows Larry's achievements as an RPG player well enough he could tell Kim the details easily when asked.

His relationship with Lars was antagonistic, though Ned was afraid of Lars' abrasive personality and interacted in a manner of a fearful and hubled minion when the two spoke.

Ned is not a man of many talents, but what talents confirmed to be had is being an efficient fast food manager with the personality of a zealous drill sergeant when it comes to running his underlings. He also seems to be a proficent RPG player given his appearance in "Larry's Birthday". Otherwise, he has no known or verified skills.

Ned is voiced by Eddie Deezen, who is famous for voicing Mandark, the arch foe of Dexter, from the classic Cartoon Network cartoon: "Dexter's Laboratory". He also has had several non-speaking background appearances.

Add a photo to this gallery
Retrieved from "https://kimpossible.fandom.com/wiki/Ned?oldid=31365"
Community content is available under CC-BY-SA unless otherwise noted.