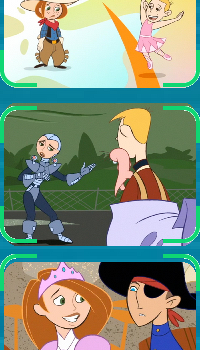 Kim lies to Ron and her parents in order to go to Monique's Halloween party and hang out with Josh Mankey.

While attempting to take back the Centurion Project, which appeared to be a small metallic bracelet, from Drakken, Kim managed to get it stuck around her wrist, not knowing what it does.

Later that same day, Monique told her that Josh Mankey would be at her Halloween party, and Kim felt compelled to lie to Ron and her mother so she could sneak off to Monique's party. She told her mother she was going Trick or Treating with Ron, which they did traditionally since kids, but tells Ron she had to be with her mother at a hospital-organized haunted house. Wade helped her realize that everytime she lied the Centurion Project grew on her body, covering more and more of it.

Drakken and Killigan were both separately listening in to the conversation at different points of time, and they each heard one of the two lies Kim told her entourage. Thinking she told the truth, Drakken went to the hospital while Killigan headed for the neighborhood, each trying to get their hands on the Project.

At Monique's party, Kim spoke with Josh, who was dressed as a pirate. He was very intrigued by the fact that she was dressed as a princess and had a cybernetic hand, which, unknown to him, was actually the Centurion Project. As Kim continued to lie, still trying to impress him, it grew more and more, eventually covering her whole body.

Using this technology, she flew over to the hospital where the two villains were questioning her parents on her whereabouts with Ron as hostage. They fought, and she won. But victory was bittersweet.

Once coming clean about her lies with her parents and Ron, who already knew the truth from the villains, the cybernetic armour receded back to its original dormant bracelet form.

Ron then proposed to Mankey they go Trick or Treating, which he accepted. Josh was even agreeable with Ron's two-person unicorn costume, of which Ron was the back-end.

Kim, who had been expressing Trick or Treating as lame, regretted her decisions as her crush left with Ron, while she was grounded.

Drakken: For the last time, I will not pay you!

Duff Killigan: “I want my money!”

Monique: Guess who’s garage band is playing at my party.

Kim: If you say Josh Mankey I swear I’ll scream.

Wade: (after Kim lied to her parents and the armor grew a bit more) "Way to go, Pinocchio."

Kid: (in a bunny costume) Mister, could you not do smell your feet? It’s really lame.

Duff Killigan: Not as cruel as I can be, Mr. Stoppable.

Man: Oh, another trick or treater. Happy Halloween. Piece of advice. The girl costume works better without the beard.

Ron: (to Kim) While I must admit that your new acquired super powers are perhaps the coolest things I've ever seen in my life, I CAN'T BELIEVE YOU LIED TO ME!

Ann: You know what we’ll have to do now.

Kim: I sense the word “grounded” coming my way.

James: Do you also sense one month and starting right now?

Josh: Too bad you’re grounded. I thought we could go back to the party together.

Cybernetic armour
Add a photo to this gallery

Kim lied to her family and Ron

Kim and Shego
Add a photo to this gallery

Retrieved from "https://kimpossible.fandom.com/wiki/October_31st?oldid=37225"
Community content is available under CC-BY-SA unless otherwise noted.