View source
This article is about the episode. You may be looking for the group, the Oh Boyz. 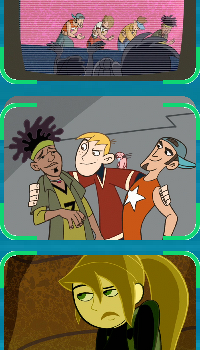 Kim and her female friends are very into a boy band - The Oh Boyz, so the next week her mother buys her tickets for their upcoming concert. But to Mrs. Dr. Possible's disappointment, the Oh Boyz are not in anymore. Ron, however, is into them, and excitedly escorts Kim to the event.

When they get there, they're the only members of the audience. Ron take the initiative and goes backstage to meet the group. Meanwhile, the Oh Boyz manager Roland Pond is cringing because the tour is losing money quickly; the Oh Boyz have a iron-clad contract that he can't break.

Then out of the blue - and to Roland's delight - Senor Senior, Sr. and Jr. come in a helicopter and kidnap the Oh Boyz and Ron. (The Seniors kidnap the Oh Boyz to ransom for connections to make Junior a teen singing sensation.) Senor Senior, Sr. calls the Roland to make his demands, but keeps getting dismissed, since now the tour isn't losing money. But Kim hears the Seniors over the phone, and goes to rescue Ron and The Boyz.

Meanwhile in prison, Junior has his dream come true and becomes a teen singer, holding a concert for the captive audience. Only his father claps at his lame perfomance.

To help his son's ongoing quest to become a pop sensation, Señor Senior, Senior kidnaps the Oh Boyz band to blackmail the record company. The plan backfires when Ron winds up captured along with the group. The record executive, finding the Oh Boyz's disappearance to be a profit windfall, is in no hurry to help. So Kim must find Ron and the others on her own.

Robby: "Roland, do you want us to tell the Record Company that you're not taking care of us? Look at what you've done!"

Robby: "This! Look! (shows Roland the magazine) It says my zodiac sign is Pisces."

Robby: "I HATE FISH!" (kicks the pile of magazines, stomping on them continuously.)

Roland: (sigh) "I'll see what I can do..." (devastatingly crawls over the ringing phones)

(Ron unsuspectingly sneaks up on Nicky Nick, who is currently minding his own business)

(music plays with Ron dancing, causing Nicky Nick to walk away with an unamused expression)

Announcer: "GIVE IT UP FOR YOUR OH BOYZ: Robby! Ryan! Dexter! Nicky Nick! Aaaaand, who's that guy!?" (clearly refers to Ron for being inside Nicky Nick's box with no permission)

Nicky Nick: (extremely aggravated with a clenched up fist at Ron, after telling him to get lost) "I told you to get lost!"