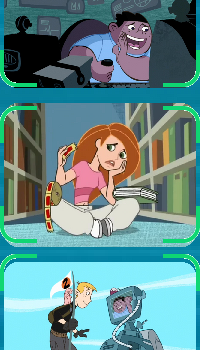 Kim's cheer career is at stake when she's left in library lockup for an overdue library book. Could Ron have something to do with it?

Kim is practicing her cheerleading with the rest of the cheer squad. Her practice is cut short when Miss Hatchet, the school’s librarian, interrupts to inform Kim that she has an overdue book and that her cheerleading activities are suspended until she is able to return the missing book. Kim is sure the book is in her locker, and goes to fetch it to hand in to the library. To her shock, the book isn’t in there.

After hearing that Kim had been kicked off the cheer squad, Ron finds her by her locker and asks her what happened. She explains the sitch and runs off to find the lost book. Ron then remembers a month ago to when he had borrowed a book that Kim had checked out, “A Brief History of CHEESE” and realizes that it’s his fault Kim can’t find the book. He sets off to find it and tries sneaking into Duff Killigan’s lair, where he thinks the book has been left. Ron, on the phone to Wade, asks him to keep the mission between the two of them. Ron then gets a call from Kim, she apologizes for acting snippy the previous day but is quickly cut off by Miss Hatchet, who gives her her first assignment - to begin organizing the school’s library books.

Ron, now inside Duff’s castle, begins looking through the bookcases. Rufus checks under the furniture. As they’re searching, they get a waft of something that Ron thinks is noxious gas. Duff then comes into the room to see who’s in his lair, and doesn't seem all that upset about finding Ron and Rufus. When Ron asks about the smell, Duff explains that he was just making himself some lunch--specifically a recipe for haggis that used to belong to his grandmother (he forces Ron and Rufus to eat some of it). As Ron leaves the castle, he hears something rustling in a nearby bush and quickly runs, thinking it’s Duff with leftovers. It turns out to be the Wadebot, which Wade made improvements to (it now has stealth mode).

The next lair Ron tries is Dr. Drakken’s. Drakken is preparing to launch his centripetal oscillator, which he will use to control the Earth’s orbit. After putting in the batteries, he notices the cupboards and shelves around the lair have been opened and messed up, and thinks Shego is to blame. She replies sarcastically, and Drakken then sees Rufus digging through his file cabinets. Rufus quickly runs over to Ron, who hides behind the Wadebot. Wade activates the stealth mode on his Wadebot and as Drakken is ready to the activate his machine, Wade turns off stealth mode and uses a claw on the Wadebot to grab the lever to the machine’s controls. Shego then blasts the Wadebot into the wall and asks Ron where Kim is. He immediately replies stating how Kim isn’t his girlfriend and after a moment of awkwardness between both of them, goes to check the final cabinet. Shego is about to stop him, but is stopped herself by Wade, who throws her towards one of Drakken’s machines. As Ron opens the cabinet a bowling ball falls out and rolls toward Drakken, knocking him into the centripetal oscillator and stopping his plan. Ron doesn’t seem to notice this though, concentrating on the fact that the book is nowhere to be seen in Drakken’s lair. Ron and Wade leave this lair and head for the lair of Professor Dementor.

At the school library Kim is putting library books back on their shelves and decides to check if Miss Hatchet is around. She isn’t, so Kim makes a call on her Kimmunicator asking Wade where Ron is, having not seen him all day. Wade, while trying to help Ron at Dementor’s hideout tells her he hasn’t heard from him at all. After hearing his voice from Wade’s end of the Kimmunicator, she is asks if it was Ron but Wade just says it’s a scream from his video game, Pollinator. Hatchet then catches Kim in the act, and orders her to put labels on every single book in the library.

As it turns out, the book Ron is looking for is not in Dementor’s lair. So now he makes his way to the lair of Monkey Fist, who is about to crown himself the Phantom Monkey King. Wade asks Ron if he is sure he took the book on a mission, which Ron says he did. He then notices a book on a pedestal and grabs it, glad that he’s finally found it. After opening the book however, a ghost-like monkey monster appears out of one of the book’s pages and Ron promptly shuts it. This of course grabs Monkey Fist’s attention and he orders his monkey ninjas to attack them. Wade goes into stealth mode again and one of the monkeys snatches the book from Ron and hands it back to Monkey Fist. Monkey Fist is about to open the book to release the Phantom Monkeys inside it, but Wade (still under stealth mode) grabs him from behind and sends him flying into a palm tree next to his throne. Ron hurriedly goes for the book, taking it back from Monkey Fist, but Monkey Fist just kicks Ron across the room, making him lose his backpack. A book falls out of the backpack, the book Ron has been looking for all this time. Ron realizes he must never have taken it out of his backpack in the first place. Monkey Fist grabs Ron and holds him in mid-air, demanding the book. Rufus hits Monkey Fist with a staff and he goes headfirst through his throne, toppling over the palm trees beside the throne and breaking his monkey idols, leaving him extremely annoyed. The monkey ninjas go to attack Ron, but he puts the two books in his bag (along with Rufus) and the Wadebot carries them out of the lair and out of the monkey ninja’s reach. They then make their way back to school to help Kim.

It’s now late at the Middleton School Library and Kim is still sticking labels to the books. Ron finally shows up and places the missing book on a shelf, then asks to rent is out telling Miss Hatchet she was wrong about it being missing all along. She doubts this but lets Kim go, sure that someday, Kim will forget to return a book and that she’ll be waiting for her. Kim and Ron leave the library and Ron tells Kim how he and Rufus stopped Monkey Fist from taking over the world with the ancient text. Kim checks out the book and notices that it’s her overdue book on cheese. Ron then realizes that he handed the wrong book to Miss Hatchet. They both look back in shock as they hear Miss Hatchet’s scream and a group of phantom monkeys rise up through the roof of the library.

"READING: It's a Novel Idea"