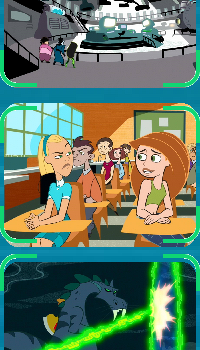 Drakken teams up with DNAmy for his latest evil scheme.

While Dr. Drakken planned to create a monster, with DNAMY's help, the students were paired by Mr. Barkin for their science projects. Bonnie was paired with Brick Flagg, which suited them both. Monique was pared with Ron Stoppable, who was not doing anything at all for it, which infuriated her. Kim was paired with Justine Flanner, a science wiz, who would not let her help at all.

Scientist: "Amy? They said you lost it. That your experiments were insane. That you were locked up forever!"

Kim: "So, Justine, tell me more about your project idea."

Justine: (Handed Kim a sheet of paper.) "Here is your to do list."

Justine: "Exactly. During the project, disappear and don't bother me. On the day of the presentation, show up and smile."

Ron: "Monique, I think that we both know that you'll do the work."

Monique: "What do you mean?"

Monique: "You..." (and made a frustrated sound, before she walked away.)

Kim: Drakken and DN-Amy... together!

DN-Amy: Well, you know what they say, “The enemy of my enemy is awful cute.”

"Science is Cool! (No Really)"