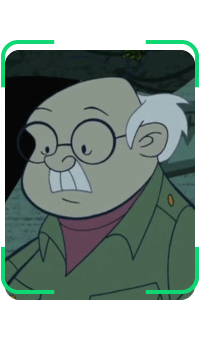 Professor Acari is an entemologist and a repeat client of Team Possible. He appears to spend much of his time inventing, because by his own admission, he has a great deal of free time.[1]

Professor Acari was very devoted to his work. He allowed his numerous insects to roam freely about his lab, which could easily prove overwhelming for the unprepared or entomophobic. He was also well-mannered but slightly absent-minded, in that he easily lost track of his inventions[1][2], although this might have been a consequence of his consistently insect-covered workspace.

Professor Acari was a talented entomologist, and as a result was very knowledgeable on various insects. Judging by his inventions, he also had experience in robotics as well.[3]

Professor Acari first hired Team Possible when Shego broke into his lab, although at the time he did not think anything had been taken. It was not until Kim noticed his computer that he realized the CD with the digital blueprint for his cyber-genetic tick had been stolen. Kim recovered the CD from Dr. Drakken's Carribbean island lair.[1]

While studying the nutritional value of various insects in China, Acari gave Kim and Ron a ride to the Forbidden City Museum.[4]

Acari again requested Team Possible's help when his invention, the Roflax, was stolen and modified by his former lab assistant Chester Yapsby. Kim recovered the Roflax.[2]

Professor Acari was always happy to see Team Possible, despite Ron's rather pronounced fear over the sheer amount of insects he allowed to roam free in his lab.

Professor Acari treated his insects as beloved pets. Among them, he had a large centipede named Legs.[1]

"Tick-Tick-Tick"
Add a photo to this gallery

Retrieved from "https://kimpossible.fandom.com/wiki/Professor_Acari?oldid=23340"
Community content is available under CC-BY-SA unless otherwise noted.