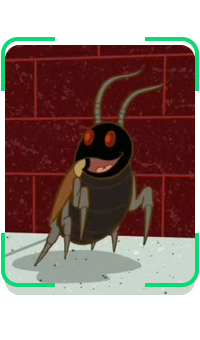 Roachie is one of several giant cockroaches that Chester Yapsby intended to turn into his evil bug battalion with the stolen Roflax. Roachie did not receive the full treatment, and became fast friends with Ron Stoppable.[1]

Roachie was a cockroach roughly the size of a small dog, or as Ron termed it, "la grande cucaracha".[1]

Roachie was generally happy and very affectionate, and would often hug, tickle, or lick Ron. As could be expected of a roach, Roachie enjoyed eating and living in trash.[1]

In addition to being able to speak to other roaches, Roachie was exceptionally good at video games. Ron had also trained Roachie to respond to simple commands, much like a trained dog would.[1]

Kim, Ron, and Rufus encountered Roachie in the sewer system beneath Professor Acari's lab, shortly after a run-in with Chester Yapsby and his then abnormally large, but not yet giant cockroaches. Unlike the others, Roachie seemed lost and far more friendly, so Ron decided to adopt Roachie, much to Kim's discomfort. Roachie instantly bonded with Ron, although aside from Rufus, no one else was anywhere near as accepting of Roachie's presence or size.

Roachie later managed to save Ron from being attacked by a giant cockroach, and once Kim took the Roflax out of Yapsby's hands, Roachie was the only one they would listen to. Ron credited Roachie with the idea to relocate all the cockroaches to Middleton Landfill, and Roachie reluctantly left Ron's side to remain there as well.[1]

Ron treated Roachie much like a favored puppy, and could even converse with Roachie in bug.

Kim was clearly uncomfortable around Roachie, due to her then newly discovered fear of giant bugs. She did manage to be around Roachie without fleeing, though would often flinch away from it. Despite this, Roachie did seem to like her.

Roachie considered the other cockroaches enlarged by the Roflax to be friends, and they seemed to regard Roachie the same way. If nothing else, one did not harm Ron at Roachie's request and even apologized for threatening him, and they all agreed to follow Roachie to Middleton Landfill.

Roachie with Kim and Rufus
Add a photo to this gallery

Retrieved from "https://kimpossible.fandom.com/wiki/Roachie?oldid=25047"
Community content is available under CC-BY-SA unless otherwise noted.