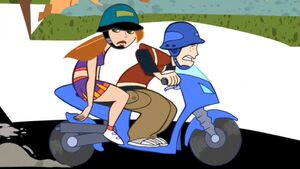 Ron Stoppable's primary source of transportation around Middleton was his blue scooter. He tended to think of riding it as, "When it's just me and my machine scorching across the blacktop, I kinda lose myself."[1].

When Kim needed to ditch detention when she had Dr. Drakken's robotic tick stuck to her nose, Ron was ready to give her a ride[2].

Later, when it was necessary to race one hundred miles to Drakken's headquarters, the scooter was affixed by James Possible with a set of booster rockets[1].

Finally, Ron and Mr. Dr. Possible used the scooter to get to the Middleton Space Center, both needed to jumped clear, allowing it to crash at speed into an alien walking war machine, which destroyed it[3].

Retrieved from "https://kimpossible.fandom.com/wiki/Ron%27s_scooter?oldid=33694"
Community content is available under CC-BY-SA unless otherwise noted.