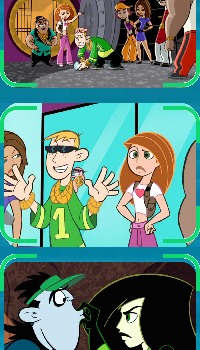 When Ron gains Naco royalties from Bueno Nacho and becomes a multi-millionaire, he loses track of his persona and becomes a self-absorbed individual. However, when Dr. Drakken attempts to steal a huge diamond in order to power his laser, he takes notice of the now rich Ron and attempts to seize his finances. So it's up to Kim to save the day and her friend Ron, despite the fact that he is no longer the Ron she used to know.

Ron: I said, "oh, yeah?"
Bonnie: And what did he say?
Ron: He said, "yeah," real mean and tough, right.
Posse: Ooooh!
Bonnie: Then what did you say?
Ron: Nothing, then I bought the place and fired his sorry self.

Kim: Sorry, Ron. How much of your money did he get away with?
Ron: All of it.
Kim: You walked around with the entire 99 million in your pockets?
Ron: Bonnie thought it was fly.

Bonnie: Ron Stoppable, you are such a hottie.
Ron: Are you saying that because I'm rich?
Bonnie: Uh-huh.
Ron: Cool!

Kim: He's calling himself "The Ron".
Wade: Or maybe he's lost to us forever.

Kim: Ok, first, not interested, and second, that money is Ron's… Not that he was any smarter with it.
Ron: Only a true friend would say something that hurtful. Thanks KP.

Ron: Hey, it's cool, KP. I may not be rich, but if I may wax philosophic for a moment, wealth isn't just about your bank balance. If you count friends, then I'm the richest man in Middleton.
Kim: Thanks, Ron.
Ron: Well, actually, now I think about it, most people have more friends than I do. I only have you and Rufus.
Kim: Only?
Ron: I mean only as in with best friends like you, I don't need anyone else.
Kim: Nice save.