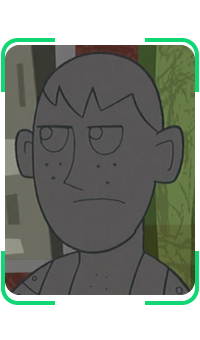 Ronacus was a famous gladiator whose statue was seen by Kim and Ron when they were on a school field trip to the Tri-City History Museum.

The statue of Ronacus appeared to be of a person of average height with a well toned physique, but not muscular.

Extrapolating from the information presented by the museum curator Ronacus most likely was a good person, since he opposed the "evil" Dracus Maximus and his quest to conquer.

As a gladiator armed with a sword it is likely that Ronacus was both a competent swordsman and had a high level of physical strength.

Ronacus lived in or around the Roman Empire and fought against Dracus Maximus, supposedly Dr. Drakken's Roman ancestor, alongside the female Mysterious Masked Warrior, who was supposedly Kim's ancestor.[1]

It was implied that Ronacus was probably an ancestor of Ron Stoppable's, seeing as how he looked like Ron.

It was said that Ronacus fought alongside the Mysterious Masked Warrior, and that she was the true key to his many victories.

Ronacus opposed Dracus Maximus' attempt(s) to conquer, thus it is most likely that they were enemies.

Ronacus is shown wearing a version of Roman armor with a sword.

Ronacus had no speaking parts.

Retrieved from "https://kimpossible.fandom.com/wiki/Ronacus?oldid=31366"
Community content is available under CC-BY-SA unless otherwise noted.