View source
This article is about Rufus, the original continuity character. You may be looking for or his movie continuity counterpart. 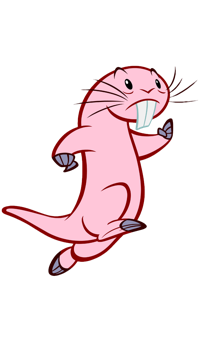 Rufus is a naked mole-rat, the pet friend, and soul brother of Ron Stoppable. He lives almost full-time in Ron's pocket, and accompanies him nearly everywhere. Rufus is exceptionally intelligent for an animal, but average by human standards, and is capable of limited speech.

Rufus was a small, pink naked mole-rat. He has black eyes. He is generally portrayed as light and very agile, which proved useful time and again.

Rufus was typically happy and fun-loving. He had a very strong bond with Ron, and shared most of his likes and dislikes, most notably a love of Bueno Nacho food[1] and a strong dislike of monkeys. Because people often reacted to his hairless body with either confusion or disgust, Rufus was fairly sensitive about comments on it.[2]

According to item 297 in Ron's Care of Rufus Guide, "It is essential for mole rats to get at least 20 hours of sleep a day."[3] While Rufus did indeed spend a great deal of time asleep in Ron's pocket, in sharp contrast, he tended to be extremely active when awake. He was especially active during missions, where he would often run alongside Ron, offer him advice or warnings of approaching danger, and even defend him from certain threats. Like Ron, Rufus also enjoyed using the various gadgets provided to them on missions.[4]

As could be expected, Rufus shared several of Ron's less attractive qualities. In particular, Rufus typically consumed massive amounts or multiple courses of food, often even faster than Ron, and would whine or complain if anyone attempted to prevent him from feasting.[3] As a result, he and Ron tended to overeat, usually together, for a variety of reasons: to keep food from spoiling[5], to prove a point[6], or simply because the food was there and they could. Just as Ron sometimes proved insensitive or simply ill-informed about issues that concerned Kim and other females, Rufus appeared to be equally inconsiderate at times, though in his case this was usually due to him either being focused on his own desires[7], or being puzzled by human behavior in certain situations.

Ron bought Rufus from the pet department at Smarty Mart the day before Team Possible's very first mission. Rufus happened to meet Ron's pet requirements exactly, as Ron needed a hairless animal that would not aggravate his father's allergies to animal fur. Though Ron was offered a cage, he chose instead to keep Rufus in his pocket[8], and named him after the imaginary friend he had in pre-K.[9]

Rufus displayed a surprisingly wide variety of skills. Shortly after Ron bought him, Rufus proved capable of opening an electronic gate by fiddling with its inner workings.[9] His electronic and mechanical know-how (he was capable of programming a VCR and clearing a paper jam inside a printer) repeatedly came in handy in various ways: making Rufus a video game legend[10], operating some of Wade's handheld gadgets and even freeing Kim and Ron from various deathtraps.[5] Rufus has also used his powerful teeth to cut through rope, grass, earth, concrete and some metals.

Rufus possessed an arguably human level of intelligence. He was able to legibly write Ron's name[11], and it was implied that he could write much more than that.[12] Rufus articulated a fairly large number of random words in clear English on occasion[13], though in most cases this could simply be attributed to making him more easily understood for the sake of the audience. However, Rufus has managed brief but ultimately successful "conversations" with Kim[10] and Monique[14], and Ron always seemed to understand him with no trouble. Furthermore, Rufus has proven proficient at beatboxing on demand[15][8], so his speech capability could not be ruled out entirely.

Many of Rufus's unexplained abilities may have resulted from various incidents throughout Team Possible's adventures. Rufus was exposed to Mystical Monkey Power at the same time as Ron[16], and displayed a degree of control over it, as well as an aptitude for ninja training, that Ron lacked for some time.[17] Due to his encounter with the top-secret Project Phoebus, Rufus was struck by a beam that contained the brainwave patterns of several geniuses, which in turn made him an unparalleled genius. According to the project's creator, the effects were supposed to be temporary, though during that period Wade admitted that Rufus was, at the time, more of a genius than he ever would be.[18] Rufus was also briefly fused together with Mr. Barkin by DNAmy, which resulted in naked mole-man.[19]

Though Rufus did not typically wear clothes, he would occasionally appear in various outfits, especially for the purposes of either protecting himself against the weather, or making a bold fashion statement.

He is the pet and friend of Ron Stoppable, and the ally and friend of Kim Possible and in general is friendly with everyone he meets.

Rufus shared several things in common with his owner Ron: the same taste in foods, and an overall laid-back, casual attitude. Unlike Ron, Rufus would abandon this attitude at crucial times, and often used quicker and better judgment than his owner. Still, Rufus stuck by Ron in virtually every situation, even if this was only because he happened to be asleep in Ron's pocket at the time. He also communicated with Ron through a series of squeaks and hisses that Ron alone seemed to understand. Rufus generally got along well with anyone that Ron did.

As a pup, Rufus was not the idea of most people's definition of a cute baby animal, with bulging eyes, the odd visible vein under his skin, and some tendency to drool. Kim's first impression of him was that he was "gross, but handy", and she was reluctant to touch him at all.[9] Over time, she came to appreciate him more, both as a friend and a valuable member of Team Possible, and didn't mind Rufus sitting on her shoulder from time to time. During the occasions when Ron was unavailable for some reason, Rufus would usually turn to Kim first for comfort and companionship.[20][3] Even when Ron was present, Rufus would still occasionally dive into the safety of Kim's pocket when frightened.[21]

Due to his role in Kim and Ron's missions, Rufus often came up against Dr. Drakken as an enemy. However, when Drakken was turned good by the Attitudinator, he and Rufus befriended each other for a time with Drakken even expressing sorrow that he would lose Rufus as a friend when he turned evil again, a sentiment that Rufus agreed with.

Rufus was the recognized ancestor of Rufus 3000 and all other hyper-evolved naked mole-rats. They all addressed him as "Rufus Prime" and considered him their undisputed leader.

Camille Leon's hairless cat Débutante had a very obvious case of love at first sight when she met Rufus. It seemed to be largely one-sided, as Rufus repeatedly reacted with fear and escape attempts when around her.

Rufus is voiced by Nancy Cartwright in all four seasons, who is also famous for voicing Bart Simpson in the animated sitcom The Simpsons and Chuckie Finster in 2 seasons of Rugrats and Rugrats: All Grown Up!.

Rufus is 2 as of Season 1; 4 as of Season 4 (estimated, based on his appearance as a newborn in A Sitch in Time).