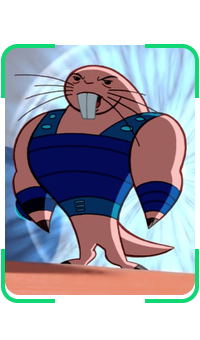 Rufus 3000 is one of 3000 hyper-evolved naked molerats descended from the original Rufus, who he addresses as "Rufus Prime".

From "A Sitch in Time"

Rufus 3000 is voiced by Michael Dorn.

Rufus 3000 is the designation for the leader genetic-modified carbon-copies of Rufus, first and only sighted in A Sitch in Time. Little is known of him other than his hardcore attitude and determination to restore the timeline to what it was supposed to be, a goal that was accomplished by Team Possible once he had given them the ability to time travel to pursuit He is also noted for making cookies. He is voiced by veteran Star Trek TNG actor Michael Dorn (Lt. Commander Worf)

Little is known of Rufus 3000, and with the destruction of the Tempus Simia, he never technically existed. What is known is that he was part of The Future's resistance forces against Shego. He was in charge of the Shegoton Resistance's naked mole rat division, based on his differing uniform from the others. He also

He is an orthograde, and can freely speak English as well as manage technical equipment and weaponry. It is unknown who created him and the other hyper-evolved naked mole rats but it's possible that it was based on DNAmy's work given she does not appear in the timeline. There were at minimal 3000 of these naked mole rats

Retrieved from "https://kimpossible.fandom.com/wiki/Rufus_3000?oldid=31742"
Community content is available under CC-BY-SA unless otherwise noted.