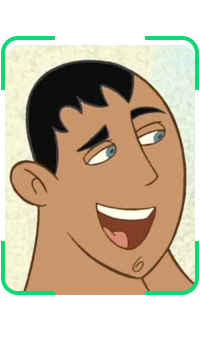 Señor Senior, Junior is a vain man-child with little to no interest in being a villain. While he generally goes along with his father's evil plans and has even attempted a couple of jobs himself, he is usually too busy maintaining his tan and dreaming of becoming a pop star to concern himself with world domination schemes.

Junior is a tall, muscular young man of Hispanic origin.

Junior is, for the most part, interested only in himself. If he put his mind to it, he would likely be a better villain than his father, as he favors simple solutions over more complex "traditional" schemes, but he is also extremely lazy. His dream is to become a pop star, although he has no musical talent.

Alas, Junior is not a man of many talents. He cannot sing, and initially was about an even match for Ron in a fight despite being physically extremely muscular. However, he eventually developed great fighting skills in a short period under Shego's tutelage, showing that he was simply lacking proper training or real desire to fight. Furthermore, at times he was clear-headed, often seeing the most direct and practical solutions in his father's dramatically complex plots. Therefore Junior displayed great potential, but because of his lifestyle and resources, had no serious motivation or reason to pursue anything outside of pleasing his father.

Junior and his father live on a fairly intimidating private island in the Bay of Biscay off the coast of Europe. Kim first encountered them when Junior's giant tanning lamp caused rolling blackouts across Western Europe. Upon going to their island and realizing that Senior had no evil intent, she gave him a lecture and pamphlets about energy conservation and let him be.

Unfortunately, during that same encounter, Ron commented that several features of Senior's island bore strong resemblance to a villainous lair, and gave him more suggestions for making his home more villain-worthy, such as adding spinning tops of doom, self-activating lasers, a speedboat for quick escapes, etc. Senior originally dismissed Ron's suggestions, saying they sounded too sinister. However, upon reflection, he decided that he needed a new hobby and pretty much dragged poor Junior along for the ride.

Junior and his father have a close if not quirky relationship. Admittedly, Senior's hobby of villainy strained the relationship, with Senior wanting his son to partake in the villainous activity. Junior initially showed little interest, but gradually got more involved, if only to advance his own agenda or to simply please his father.

While Junior is in villainy for the sake of his father, he has partnered with Shego a few times to great effect. They first met when Shego was hired to tutor Junior in villainy so Junior and Senior could share a bond. Instead, Shego and Junior ended up becoming friends and Junior a more competent villain. They met once more when he freed her from prison to help think up with a gift for Senior's birthday. Despite both encounters ending badly, they appear to have developed respect for one another and Shego seems to tolerate him more than any other villain.

During the Animology craze, Junior developed a crush on Kim after finding out their Animology profiles were compatible. Because the book said they were soul-mates, Junior saved Kim's life and showered her with flowers. They eventually returned to being on opposite sides, though just as his father does, Junior tends to view Kim more as an occupational occurrence, rather than an actual enemy.

According to Ricky Rotiffle, Junior was searching the world over for "the right combo of shallow, selfish, and insensitive, but still hot enough" in a girl, and his search ended when he found Bonnie, who was as shallow and sultry as he wanted. Likewise, Bonnie had just been dumped by Brick Flagg, and wanted to meet "a regular, normal, shallow hottie, preferably not too bright". Junior met Bonnie during her Senior Homecoming week when she accompanied Team Possible on a mission. It was essentially love at first sight for both, and they remained together through her graduation. Though both are known for being extremely selfish people, they genuinely seem to enjoy their time together.

Junior is voiced by Nestor Carbonell.