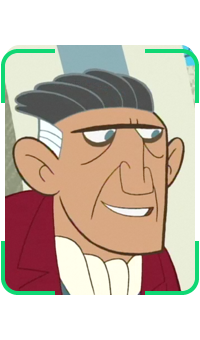 Señor Senior, Senior is an extremely rich, fairly nice old man who turned to villainy thanks to an offhand suggestion by Ron Stoppable. He is very dedicated to what he considers "traditional" villainy but treats it more as an entertaining hobby than anything else.[1]

Senior is an older man, likely of Hispanic origin. He is pretty tall, and has a tattoo of his initials, three S's, on the back of his neck.[2] Though he typically uses a cane, he regularly participates in various strenuous activities that suggest it is mostly decorative in nature.

Senior is typically extremely respectful and well-mannered, even to those he has no reason to like. He seems to take great pleasure in being a devoted father and, quite simply, being wealthy. He is entirely different from nearly every other villain, in that he turned to sinister only for want of a new hobby to pass the time. As such, when his sinister plots fails he never holds a lasting grudge, and perhaps simply chalks the defeats up to being part of a grand game that he enjoys playing. He is also notably unmindful of and typically unconcerned with how people without wealth live.[1] This tends to result in his interactions with people either out to acquire his money[2], or uninterested in catering to his brand of villainy, ending poorly for Senior[3].

His fixation on traditional villainy also tends to allow for some rather questionable events. Notable among these was his refusal to crucify Kim outright and allow her a chance to get away, and his preference to not aim a deadly laser directly at Team Possible. According to him, there was a proper way to be a villain that he perfectly aspired to, and wished for his son to join him in. He especially enjoys practicing and hopes to perfect a proper sinister laugh someday.

Senior's main asset is his outrageous personal fortune, which allows him to simply buy weapons and evil technology that other villains have to work to steal or build.[1] While he is not typically one for physical fights, being an older man, he is still in surprisingly good shape. Senior is incredibly good at extreme sports, was able to fight Kim more or less evenly while skydiving[2], and owns an indoor mountain that he enjoys skiing on.[1]

Senior and his son Junior lived on a fairly intimidating private island off the coast of Europe. Team Possible first encountered them when Junior's giant tanning lamp caused rolling blackouts across Western Europe. Realizing that Senior did not mean any harm, Kim gave him a lecture on energy conservation, which he seemed receptive to. Unfortunately, Ron commented that several features of Senior's island bore strong resemblance to a villainous lair, and gave him more suggestions for making his home more villain-worthy; including spinning tops of doom, self-activating lasers, and a speedboat for quick escapes. Senior eventually came to agree, stating he needs a new hobby, and proceeded to black out Europe on purpose and demand control of their "nice, little islands." Team Possible shutdown Senior's plan, but thanks to Ron's speedboat idea, the Seniors escaped.[1]

Senior's only known family is his son, Señor Senior, Junior. They appear to be fairly close, although Junior resents his father's focus on traditional villainy, and prefers to use their vast fortune to become a famous pop star[3]. Despite this, at times Junior did seem very eager to please his father[2].

Senior does not typically work with other villains, other than his son. Though he did briefly hire Shego to tutor Junior in evil, and the venture was quite successful, Senior came to miss sharing evil plots with his son and released Shego from their arrangement[4].

Perhaps because Ron Stoppable was the person who suggested evil to Senior as a hobby, Senior always treated Team Possible with an unusual amount of warmth and even affection, viewing them more as opposing players in a spirited game, rather than actual enemies. Several times he expressed his delight when they arrived to challenge him, and actively looked forward to their encounters. This did not prevent him from preparing elaborate death traps for them, but at the same time, he never seemed too disappointed when they survived, as he valued the entertainment they provided him with more than their actual demise.

The president of the Billionaires' Club, Senior thought of Bullion as little more than a pompous individual until he revoked his and Junior's club memberships as a result of their conflicts with Kim Possible reflecting poorly on the club. Senior sought revenge by stealing a cryovator device from Pop Pop Porter, reverse-engineering a larger model and freezing much of the club.

Vincent Wheeler was hired on as a financial advisor so the Seniors could focus full-time on their villainy. Instead, Wheeler stole their fortune from them by tricking Junior into signing it over to him. As a result, Senior took it upon himself to steal his fortune back, using his long-dormant X-Games skills to commit four separate heists on Wheeler's businesses and racking up a two billion dollar bounty for his arrest.

Senior usually wears a burgundy suit coat with a white cravat and a blue shirt underneath, khaki slacks, and brown shoes.

From "The New Ron"

Senor Senior Sr. is voiced by Ricardo Montalban, who was best known for playing both the Vincent Ludwig from the first Naked Gun and Khan in Star Trek II: The Wrath of Khan.

Senor Senior Sr. is voiced by Earl Boen in

He formerly belonged to a billionaire's club (He was ejected for fighting with, and losing to, an American cheerleader. It seemed a bit "too weak-like"), and regularly has the four other richest people in the world (including Pop Pop Porter and Marvin Smarty) over to play cards.