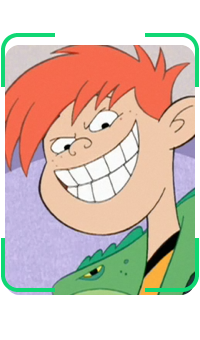 Shaun is a seven year old cousin of Ronald Stoppable. His last name is unknown.

Shaun was a notably mean-spirited little boy. He thoroughly enjoyed tormenting Ron and Rufus. Some of his past pranks included trashing Ron's scooter, pouring gravy down Ron's pants, and attempting to feed Rufus to his pet iguana.

Shaun came to Middleton for the wedding of Reuben Stoppable and his bride. He was invited to stay in the Stoppable House by Ron's parents, and more specifically, in Ron's room. Exposed to Shaun for less than five minutes, Ron went next door to the Possible house to sleep on the couch in the den.

Just prior to wedding, Ron was turned evil by The Attitudinator, and arrived at the reception by crashing in on a monster ATV. Even then, Shaun was unafraid and hit him in the head with cake. In retaliation for years of pent up frustration and torment, the evil Ron transformed his ATV into a plasma catapult and attacked Shaun, as well as the entire reception.

However, even after Ron was returned to normal, he still used the Attitudinator on Shaun, which forced Shaun to become a polite, giving boy. It is unclear if this effect was ever reversed. Furthermore, based on the vague way in which the Attitudinator worked, it is equally unclear if it either drained the evil entirely out of Shaun, or only suppressed his evil by overwhelming him with good energy.

Ron feared and desperately wanted to escape being forced to spend any time with Shaun. Ron's own parents were unsympathetic because Shaun was younger than Ron.

Shaun was voiced by Tara Strong.

Retrieved from "https://kimpossible.fandom.com/wiki/Shaun?oldid=32022"
Community content is available under CC-BY-SA unless otherwise noted.