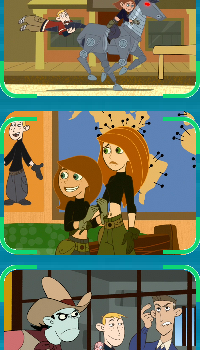 Kim goes to visit her uncle in Montana and finds herself dealing with her number-one fan, Joss. Together they work to stop Drakken's latest scheme to put the brightest minds out of commission.

Ron is relaxing at Kim's house. Kim asks Ron if he plans to chill all summer, to which he replies that he is “marinating, relaxation for the professional!” Kim proceeds to tell Ron that she'll be in Montana, visiting her uncle and asks Ron if he'd like to come with her seeing as her mom has to work.

Meanwhile at Dr. Drakken's lair, Shego is checking the mail, burning any bills she finds when she comes across a letter addressed to Drakken who quickly snatches it from her before she can read it. Drakken begins to read the letter before tossing it into the fireplace in frustration, but Shego grabs it before it gets destroyed in the fire to read it for herself. The letter turns out to be from the Cerebellum Ultra Smart Super-genius Thinking Society, a club which Drakken was rejected from (and seems to have been rejected from at least one other time). Shego teases Drakken, asking him why he wants to join a “super dorky club”. Drakken decides that if he is to make himself seem like a genius, he needs to get rid of the competition.

Kim, Ron and her family arrive at The Lazy C, the ranch belonging to Kim's Uncle Slim, who we meet shortly afterward when he calls his younger brother James Possible, “squirt”. Jim and Tim laugh at this nickname and Dr. Possible introduces Slim to Ron, telling him that Mrs. Possible couldn't come due to her shift at the hospital. Kim wonders where her cousin Joss is, who told Kim she had a surprise waiting for her when she arrived. Slim tells Kim that Joss is going through a phase, and that she has a hero who she idolizes. Joss then appears, swinging through the air on her makeshift grappling hook, landing in Kim's arms. It is revealed that Kim is Joss's hero, to Kim's surprise.

Later on, Ron is seen moseying at the ranch, where he sees one of Slim's robotic horses Old Tornado. He runs away from the horse and hides behind Tim who asks him if he's afraid of horses. Jim tells Ron that the horse is not real, but just a robot. Kim then tells the twins that robotic horses are the kind he fears the most. Ron has a flashback to when he was outside Smarty Mart ten years ago, where he lost two baby teeth. Kim tells Ron that he should get past his fear of horses, when Joss jumps in and agrees and tells Ron to be more like Kim. Ron then approaches Old Tornado who suddenly rears up, scaring him but stops after being switched off by Slim. Slim and Dr. Possible go shopping while Joss shows Kim her bedroom.

While at the store, Dr. Possible meets his colleagues who were expecting to see him around. After being told they're there for the Wild West Science Festival, something only the top scientific minds from around the world were invited to, Dr. Possible wonders why he was never invited, and his colleagues leave for the Crooked D after realising this. Over at the Crooked D, Drakken prepares to put his plan into action, while Shego mocks him, saying his plan will probably fail. This naturally annoys him, but Shego is left unimpressed.

Back at the ranch, Joss is showing Kim and Ron her room which is covered in pictures, mostly of Kim but also of wanted posters of villains such as Drakken and Shego. Ron notices there are no pictures of him as the sidekick and when he brings this up, Joss thinks he is talking about Wade. When Ron tells her he is talking about himself, Joss fails to recognise him at first, but after seeing Rufus she remembers him from the times he's lost his pants.

Having returned from the store, Slim shows Dr. Possible his satellite room, where he keeps an eye on his ranch. Dr. Possible asks if he could check out the Crooked D to see what his colleagues are up to at the science festival. Slim tells him it doesn't matter who knows he's smart, so long as he knows it. Back at the Crooked D, Drakken announces to the scientists that they may put on their hats, at which point they all begin acting extremely silly. Shego points this out and Drakken reveals that it's because of his invention, the silly hat.

In Joss's room, Kim is telling her cousin about her world-saving adventures but is unable to tell Joss anything new due to Joss already knowing everything about each of her missions, except for the parts that deal with Ron doing something. Kim, now at a loss, asks Joss what she wants to do. Joss replies telling her she'll do whatever Kim wants to do. Ron decides to go elsewhere seeing as Joss only seems interested in her cousin and catches Dr. Possible in Slim's satellite room, asking him what he's doing. They both end up going down to the Crooked D where they see Dr. Possible's colleagues acting ridiculous and wonder what's going on before getting captured by Drakken's henchmen. Kim, who's hiding from Joss at the ranch, calls Wade and tells him about her obsessive cousin and her need to get a life. Joss overhears this, and dejected, returns to her room. Kim goes to apologise and is shortly afterward called down by Slim to discover her dad and Ron have been captured by Drakken. Joss gets excited that Kim's foe is nearby, saying how nothing exciting happens where she lives, but Kim tells her that it's not something to get excited about. Meanwhile, Drakken locks up Dr. Possible and Ron and Dr. Possible quickly figures out Drakken's plan. Drakken then tells him how Possible's manage to take the fun out of everything before Shego bursts through the door to tell Drakken about Kim and her family approaching the Crooked D.

Kim, Joss, the tweebs and Slim prepare to take on Drakken and his henchmen. Jim and Tim manage to take out a couple of the henchmen, and Slim is able to destroy their weapons. Kim goes to fight Shego, telling Joss to stay clear, but while Kim tries to free her dad and Ron, Joss crashes into Kim and gets them both captured. Slim and the twins also get captured and they are all locked up with Dr. Possible and Ron. Kim attempts to grab the key right outside the cell door, but is just out of reach. Ron then calls Rufus out of his pocket to get the key. After one failed attempt, Rufus is able to grab the key but sets off a trap, alerting Drakken. Slim then activates Old Tornado which manages to free them all using its magnetic hooves; removing the cell door (and Drakken's pants in the process.) Drakken makes a run for it and Kim and Ron go to catch him on Old Tornado, but Shego snatches the control and sets it off, causing Kim to fall off and Ron clinging to its tail. Both Kim and the twins try to get the control from Shego but fail. Joss is able to stop Old Tornado herself by jumping on top of it and switching it off by the controls on its neck. Having stopped Old Tornado, Kim takes back the controls from Shego. She and Drakken then make their escape by creating a stampede as a distraction with the scientists that gathered at the science festival.

Ron and the Possibles see the stampede and Dr. Possible rushes in to knock off the silly hats and save his colleagues. Having foiled Drakken's plan, Kim, Ron and her family return to the ranch to settle down for dinner. Kim asks where Joss is, having not seen her in a while and her dad tells her that he saw her with Ron. Kim goes to Joss's room, only to see that Joss has replaced all the pictures she had of Kim with pictures of Ron, saying that because Kim can do anything, facing bad guys isn't a problem, but because Ron has many fears but doesn't let them get in the way of his sidekick role, that that makes him a true hero.

Usually its Ron who loses his pants, but this time its Drakken, this is the only episode in which it's someone other than Ron who loses their pants when they weren't doing anything super heroic like Kim does.

This episode does not take place at Middleton High.

Joss is trying to be just like her cousin, Kim, and for one she manages to get her room in the attic like Kim, but when she overhears Kim talking to Wade and gets upset, you hear her slam the door, but there is no door.

Retrieved from "https://kimpossible.fandom.com/wiki/Showdown_at_the_Crooked_D?oldid=36174"
Community content is available under CC-BY-SA unless otherwise noted.