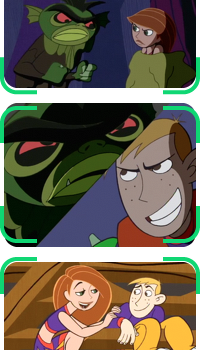 On their way to a cheer competition, the Middleton Cheer squad gets stranded at an old camp Ron has a long history with and face Gill, a high-school mutant who is determined to get his revenge on Ron.

The Middleton Cheer Squad is being driven to a cheer competition by Mr. Barkin, but Ron's Mad Dog antics are starting to eat away at certain members of the squad (namely Bonnie). As Kim warns Ron to act 'normal' for a change, Ron begins to notice something familiar about the road they're on. In a sudden panic, Ron calls Wade on the Kimmunicator wanting a GPS lock on his position. Wade obliges and the data confirms Ron worst fears - they are near Camp Wannaweep.

Ron urges Mr Barkin to drive fast and explains the camp is the site of his worst summer ever and that he would never come back. Suddenly the bus drives over some tire spikes, causing the bus to come to a halt outside the main gates to Camp Wannaweep. Barkin informs the team that the bus has two flats and that they need to call for help. As such the girls all pull out cellphones only to find there is no signal and even the Kimmunicator is not working. Barkin tells Ron to lead them to a phone in the camp. It then dawns in Ron that he is in charge for once, according he declares to the team only he knows how to survive the dangers of Camp Wannaweep. The team enters the camp only to discover the phone is out of order. Tara recalls that their situation is just like from horror films, innocent teens trapped in the woods getting picked off one by one. Kim is quick to dispel that idea and even Bonnie agrees, as if it were a movie there would be more guys. Kim announces that they're stuck for the night and might as well make the best of it.

As the team sits around the campfire Ron tells them stories of his time at Camp Wannaweep. Barkin tells Ron to stop, when Ron notices a rustle in the bushes. As Ron goes to investigate, Kim tells him to relax and enjoy the campfire. As they leave the bushes a swamp creature appears briefly watching the team. Kim and Barkin soon leave in search of more firewood, citing they can’t stand to listen to another of Ron’s stories. As Barkin and Kim wander into the forest, the swamp creature follows them. Back at the campfire Ron tells the story of the lake at Camp Wannaweep. In the story, Ron recalls how he did not want to go swimming in the lake due to the fact it was green, it smelled and he had seen the fish glowing at night. Ron ended up trading his afternoon swim with a kid called Gil and Ron taking Gil's spot in arts and crafts. Back in the forest as Kim and Barkin collect firewood, Kim hears a noise. Barkin dismisses this, saying Ron’s stories must be getting to her. Suddenly a creature grabs Barkin's leg and pulls him into the bushes. Kim notices Barkin has vanished and calls out to him, but there is no response.

As Kim returns to the campfire she asks the rest of the team if they have seen Barkin. Kim asks where Liz and Marcello have gone, when suddenly two screams are heard. As Kim and Ron rush to the site, they find no trace of the girls and only a strange footprint in the dirt. Ron decides they must move to his old stronghold Cabin 13. As Kim and Ron debate over who is in charge, Barkin is heard calling out from th

e forest. Kim and Ron race out to find Barkin covered in green slime, talking about a strange creature that oozed muck. Suddenly screams are heard from the rest of the team. Kim, Ron and Barkin run back to Cabin 13 to find it in ruins, the rest of the team pinned to the walls by green slime and the mysterious creature. The creature then revels itself to be Gil (who now calls himself Gill). Gill then traps Kim in his slime and tells Ron he knows all about how great Ron's life is. Gill reveals that the lake was toxic and the reason for his mutation. Gill also tells the team that he jammed their cellphones and caused the bus to crash in order to get his revenge on Ron. As Gill advances on Ron, Ron escapes through a tunnel in the floor of the cabin, as this happens Barkin starts to mutate due to contact with Gill's slime. Ron’s tunnel emerges into the arts and crafts building and he begins collecting supplies. Gill suddenly bursts through the floor and begins shooting slime throughout the room. But once again Ron is able to escape.

Ron is then seen building a net from rope, while Rufus fixes an outboard motor on a motorboat. Ron and Rufus then take off across the lake in the motorboat. Gill hears the engine start and heads off after Ron. Suddenly the boat's engine dies and Ron complains it's out of gas. Gill then appears next to the boat, so Ron dives into the lake. As Gill and Ron fight in the water a rope slips onto Gill’s leg. Ron grabs the rope and tells Rufus to start the engine. The boat then hurtles across the lake with Gill in tow, until it crashes into the dock leaving Gill high and dry.

The next morning Biohazard teams arrive to decontaminate the squad. Kim introduces Ron to Dr Lurkin, who they hope is able to reverse Gill’s mutation. As Gill is taken away, in a giant fish bowl, he once again vows revenge on Ron. As the squad leaves the camp they all thank Ron and Tara even kisses him on the cheek. As Ron takes one last look at the camp, Kim comes over and congratulates him for saving everyone. As they leave Ron asks if he can call the shots on their next mission, however Kim's response is that that's ferociously unlikely.

Ron: (To Kim) On the school bus, Barkin’s in charge. When we’re saving the world, you’re in charge. But here at Camp Wannaweep, I’m in charge!

Kim is featured in her cheerleading outfit for the entire duration of the episode.
Add a photo to this gallery

Ron in his cheer-leading mascot tracksuit.

Younger Ron as he was dressed during the traumatic summer at Camp Wannaweep.

Looking badical in his green ducky-wings and an orange life-vest.
Add a photo to this gallery

Ron realizing he was at Camp Wannaweep

Kim explains to Ron how brave he is.
Add a photo to this gallery

Retrieved from "https://kimpossible.fandom.com/wiki/Sink_or_Swim?oldid=36523"
Community content is available under CC-BY-SA unless otherwise noted.