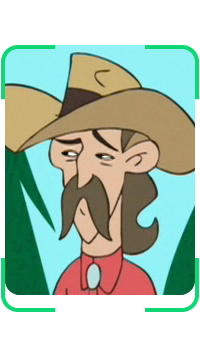 "Slim" Possible is the older brother of James Possible. Although a talented scientist and inventor like his brother, he prefers the quiet, solitary life of a rancher. He owns and operates the Lazy C Ranch in Montana, where he and his daughter Joss Possible live.

Humble to a fault he says his brother is the real genius in the family. Personality wise, Slim is modest, calm under pressure, and slow to anger. Despite being adept at using advanced technology, Slim seems to prefer the simple life, and to possess typical Montana values.

Slim is an accomplished scientist and inventor. Among his creations are a series of cybertronic robot horses that are able to mimic the form and function of a real horse, and an advanced surveillance satellite capable of monitoring his ranch and the surrounding area.

Little is known about Slim Possible. He first made his first appearance in season 3, and was introduced when the Possible Family and Ron visited him during summer vacation.

During this time, Slim helped the other members of the Possible family in foiling a scheme by Dr. Drakken to transform the worlds geniuses into lackwits using brain wave altering cowboy hats.

As of the start of Season 4, Slim has not appeared again in the show, and has not been referenced by name. His picture was also notably absent from the family photo wall scene during the Season 3 finale, though his daughter's picture was displayed.

His last appearance was in "Graduation".

Joss has a great love for adventure and seems to resent her father's choice to raise her in such quiet, peaceful surroundings. As she puts it, "nothing ever happens 'round here". However, Slim encourages Joss to be herself, and is a fairly relaxed parent, especially when compared to how overprotective James tends to be of Kim.

Though Slim is somewhat isolated from James and his family, the two brothers are very close. Slim is especially fond of his sister-in-law Anne and his niece Kim, and tends to greet them with huge hugs that lift them off of their feet.

Retrieved from "https://kimpossible.fandom.com/wiki/Slim_Possible?oldid=32125"
Community content is available under CC-BY-SA unless otherwise noted.