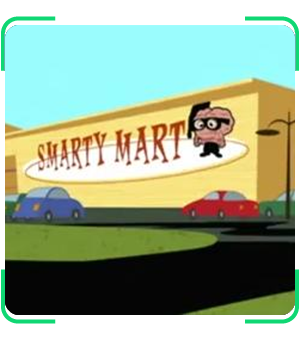 Smarty Mart and Club Banana are owned by the same parent corporation. Smarty Mart is reviled by Kim Possible for its low prices, "discounty" atmosphere and general unpopularity with fellow trend-keepers.[1]

Ron Stoppable was a Smarty Mart enthusiast, and shopped there so frequently he knew the Middleton store's greeter Oscar personally. This was also where Ron bought Rufus.[1]

Ron was offered a job by Smarty Mart owner Martin Smarty as thanks for saving him from a kidnapping attempt by Shego, and began working in the pet department.[2] He later found that Mr. Barkin had worked in housewares for almost fourteen years and was truly passionate about it.[3]

There are at least three thousand locations nationwide, with a new store opened every week.[1] The Middleton store is very close to JP Bearymore's Pizza Party-Torium[4].

Retrieved from "https://kimpossible.fandom.com/wiki/Smarty_Mart?oldid=33774"
Community content is available under CC-BY-SA unless otherwise noted.