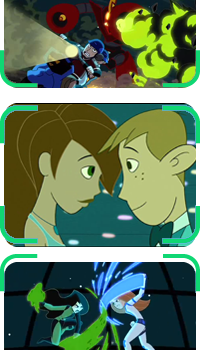 So the Drama is the second feature-length animated movie of Kim Possible, following A Sitch in Time.

It was intended to be the series finale until the show was renewed for a 22-episode fourth season.

Kim Possible and Ron Stoppable have been summoned for a second time to help the toy-manufacturing tycoon Mr. Nakasumi, and foil an attempt by Shego to kidnap Nakasumi for Dr. Drakken. Despite her failure to capture Nakasumi, however, Shego does manage to get his jacket.

Despite this initial setback, Drakken finds something in Nakasumi's jacket. An epiphany provides him with high hopes and a plan he won't divulge to Shego. Shego snatches the note Drakken found, but to her its contents are nothing more than a cartoon character. But it is one of the final components of part of Drakken's elaborate master plan to finally "take over the world," and "defeat Kim Possible once and for all". Two other stages in his plan that have already been carried out include the development of "Synthodrones", a more advanced model of the synthetic/artificial people that Drakken had unsuccessfully experimented with some time back, and a bizarre research project investigating the lifestyles of teenage girls.

For Kim, a teenage girl matter just happens to be a growing concern. The Junior Prom is approaching, and with the usual taunting from rival Bonnie Rockwaller thrown in, Kim is facing the realization that she has never had a steady boyfriend, and that her crime-fighting lifestyle might be a lead contributing factor of this. She is also troubled at the awkward possibility that her best -- but less-than cool and mature -- friend Ron, might end up her only prospect for the prom.

Ron is concerned at the moment with other things that matter only to him. Bueno Nacho, the fast-food chain that has been his great joy in life, has come entirely under new ownership, and are implementing numerous small changes that are sapping away Ron's joy little by little.

Kim and Ron's separate feelings of woe end up intersecting. Ron strikes up a friendship with Eric, a boy new to their school. But when Ron introduces Eric to Kim, there is an instant and mutual attraction between them. Immediately, Kim and Eric are dating steadily and Kim is happy, while Ron finds himself increasingly on the sidelines of Kim's life.

To complete the final stage in his master plan, Drakken requires the most advanced "cybertronic technology" in existence. As it happens, Kim's father, Dr. James Possible, is the one scientist who possesses it, leading Drakken to kidnap him to get it. Although Kim and Ron find Drakken's lair and rescue Dr. Possible, Drakken and his organization have escaped to parts unknown, and the heroes are still unable to fathom any of his plans.

Shego is also finding herself unable to grasp Drakken's new plan. Drakken is pleased because he knows that if Shego can't figure out his scheme, neither can Kim. Drakken baffles Shego even more when he goes to a board meeting at a company he recently acquired.

Bueno Nacho has introduced their first kiddie meals, which come with a small, toy robot-figure called "Little Diablo". The Little Diablos are a worldwide popular sensation, and children all over the world are grabbing them.

Kim realizes Ron's growing unhappiness and tries to have a heart to heart talk with him, explaining that things are changing and it's time to move on in life.

Eric has asked Kim to the prom, to her delight. Meanwhile, Ron soon realizes his own feelings for Kim, and at first he decides to tell her, but then reconsiders, valuing her friendship too much to risk losing it.

At the prom, Kim and Eric are the center of attention. Ron decides to go to Bueno Nacho and hang out by himself, trying to deal with losing Kim. Ned tries to tell Ron something bad is happening in the restaurant chain, but all Ron notices is that the bendy straws have been taken away. Ron decides it is time to complain to the new owner of Bueno Nacho. With Wade's assistance, Ron is connected, and finds the person on the other end of the line is none other than Dr. Drakken. One secret revealed, the restaurant's new manager, an agent of Drakken's, unleashes another. Like a miniature army, the tiny Little Diablo toys come to life and go after Ron. Eluding the pursuing Diablos, Ron bursts into the prom and tries to warn Kim and everyone else. He is immediately dismissed as crazy, and even Kim, nearly giving in to peer pressure and Eric's disbelief, almost dismisses Ron's warnings as well. But, remembering that she and Ron have been through too much together for a long time, and that she has experienced plenty of bizarre things in crime-fighting, Kim relents and returns with him to her home to investigate further. Eric seems displeased.

At Kim's house, it is revealed that the Diablos are made from the cybertronic technology Drakken stole from Kim's father. Elsewhere, Drakken demands that Shego gives him a status report. While there are enough Diablos around the world to implement the final phase of the plan, Kim is getting wise to them. His plans in danger of being exposed, Drakken unleashes a direct attack on Kim. Tim and Jim's own Little Diablo toys suddenly transform into giant, killer robots, fully armed with weapons. With help from the Possible family, Kim and Ron succeed in defeating the robot attack. Drakken reveals to Kim he has Eric.

Angrily, Kim dons a new experimental battle-suit from Wade that has the ability to repair itself and enhance the physical ability of the wearer, and she and Ron head for Drakken's new lair, Bueno Nacho's corporate headquarters. After a furious battle, Kim defeats Shego and finds Eric unharmed. But, Kim then learns that she had been viciously deceived, and that Eric, from the start, is actually one of Drakken's new Synthodrones. Eric (or Synthodrone 901) hits her with a jolt of electricity, knocking her out. Ron attempts a rescue but is knocked out by Shego. Kim and Ron are taken prisoner, and wake tied up in a storage room.

The entire world is soon under attack from armies of the giant Diablo robots. Kim, deeply humiliated and depressed at how she had been played all along, is close to conceding defeat. Ron gives Kim a pep talk saying that it is not too late to stop Drakken, and that Kim will find the right guy. Kim asks if he really thinks there's a guy for her, and Ron says there might be one who's out there... or in here. Upon hearing these words, Kim begins to realize who the guy of her dreams really is. Rufus then appears and uses Kim's laser lipstick to cut his friends down. The three head off to stop Drakken and his accomplices.

Believing that he has finally won, Drakken begins to gloat, until Kim comes in and punches him across the room. Kim and Ron head up to the roof to destroy the master signal tower controlling the Diablos, but Shego and Eric get in the way. While Kim is able to hold her own against Shego, Eric proves to be too much for Ron, but makes a mistake by insulting Rufus. Angrily, Rufus bites a hole in Eric's foot, causing his syntho-goo to gush out, killing him. At the same time, the signal tower is destroyed and the Diablos deactivate. Knowing his plan is ruined, Drakken attempts to flee, but Ron cuts him off, saying that he crossed the line when he "ruined" Bueno Nacho. Drakken begs for mercy and Ron forces him to finally say his name.

Drakken and his goons are taken into custody and the media broadcasts the news of Kim and Ron's victory. Kim shocks everyone when she returns to the prom holding hands with Ron. Bonnie attempts to get everyone to laugh at the new couple, but instead they all cheer. At first Kim and Ron are too embarrassed to move. Rufus gets the ball rolling by pushing his friends together. Kim and Ron take each other's hands and nervously start to slow dance to Christy Carlson Romano's song "Could It Be". As the dance goes on, they become more comfortable and begin to see each other in a new light. Towards the end, they look into each other's eyes, slowly lean in, and finally kiss. Outside, the Middleton High School board reads, "THE END" as the camera pans to the stars[1].

(Kim, Ron and Rufus jumped out of the plane)

(both Rufus and Ned slap themselves on their foreheads)

So the Drama movie poster

So the Drama DVD case jacket

So the Drama DVD cover (without the extended edition text)

The original screenplay for the final scene of So the Drama, where Kim and Ron have their moment at the Junior prom.

The scene of Shego using her jet's claw and going through the parade balloons is similar to a scene in the 1989 Batman film where Batman used the technique to deal with the Joker's poison gas filled parade balloons.