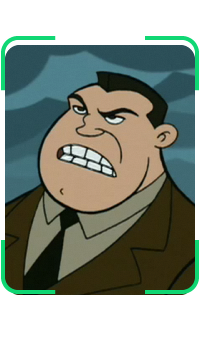 Steven "Steve" Barkin is a substitute teacher at Middleton High School, which is attended by Kim Possible and Ron Stoppable. For reasons of frequent injuries, sickness, or vacation among other staff members, Barkin teaches a variety of classes, ranging from gym to home economics.

Barkin is tall with a large muscular build. He has dark eyes and dark hair cut into a neat flattop. Barkin's beard is lighter in color than his hair and grows at an abnormal rate, he has to shave 15 times a day to keep clean-shaven. If he doesn't, he grows a dense stub in only 19 minutes and a thick beard within hours.[1]

Barkin is one of the only characters in the series whose height is actually given. When he was arrested by the fashion police[1]his mugshots were shown. In these mugshots he stands at 6' 1" (185.5 cm), given his height in the mugshot minus the 3" heels that he states he is wearing.

Barkin's manner is a gruff, no-nonsense, quick to anger, and contains little to no sense of humor. He is typically abrupt and abrasive with students, and is a stickler for punctuality and proper decorum.

Barkin tends to be skeptical of things that he does not understand, especially when the explanation goes over his head. For example, while grading science experiments, he commended two students for building the classic volcano out of vinegar and baking soda, but cast extreme doubt on a device capable of tearing a hole in the space-time continuum. He ended up activating the device and unwittingly releasing a genetically engineered "Dino-thing" that had been trapped in the rift earlier.

Barkin's personality has brought him into conflict with Kim on a number of occasions, primarily when he believed her missions or social life were encroaching on her school work, or that she had not been paying attention. He has also been particularly harsh with Ron, whose laid back personality conflicts with his own, and has been known to single Ron out when dealing out punishment or trying to make a point.

Despite this, Barkin tries to take a "tough, but fair" approach. He refuses to play favorites in his classes, and will give "credit where credit is due" regardless of what he thinks of the student at other times. Additionally, while Barkin typically likes to be in charge, he has also been known to defer to others quickly, and without argument, when he recognizes that their experience outstrips his own, including Kim when villains encroach upon school and class time.

He has been known to have a more gentle side that includes an appreciation of baked goods, a deep enthusiasm for selling housewares, and serving as a den mother, or "Brigadier Pixie", for a troop of Pixie Scouts in Middleton, although he ran the troop more like it was a division of the United States Army Rangers. He also sleeps with a teddy bear named Mr. Fuzzy.

He is revealed to have served in an unspecified war or "police action" where he achieved the rank of Lieutenant. Which explains his conducting himself more like a drill sergeant than a teacher. His military service would also explain his strict no-nonsense attitude. He tends to panic in a major crisis, which indicates that he may suffer from Post Traumatic Stress Disorder, aka shell shock, presumably as a result of some bad wartime experiences. This has made him extremely paranoid, and he often jumps to completely irrational conclusions that usually involve some sort of conspiracy, government or otherwise. He has also been prone to hysteria, and in an incident where he was stuck in a crate with Ron, quickly became delusional and erratic, whereas Ron was notably calmer by comparison.

Barkin has a deep personal dislike of mutants[2], and unfortunately, he has been turned into one on two occasions --first by the mad scientist DNAmy, who fused him with Rufus to create a Naked Mole-rat-man monster; then by Gill, who exposed him to a toxic enzyme which triggered the growth of his own set of gills.

Little about Barkin's history prior to Kim's Sophomore year is known. His father's name is Franklin. It is known that he attended military school as a child and that he served as a Lieutenant in an unidentified military conflict where he was stationed "ten clicks north of Jai Alai", during which time he learned how to cook. It is implied that Barkin has been a teacher at Middleton longer than Kim and Ron started attending the High School.

During Kim's Senior Year Graduation he mentioned that before his own graduation he was a "big man on the football team", "dated the most popular girl in school", and even "helped save the world from time to time". He did state that senior year was the best two years of his life, suggesting that Barkin had to repeat his senior year for some reason.

Barkin appears to have a wide range of abilities as a teacher since he substitutes for nearly every class at Middleton High School.

Over the course of the years, he had taken on a number of roles traditionally associated with a senior faculty member, including setting school policy, leading pep rallies, making official announcements over the speaker system, and managing disciplinary procedures against students. He also represented the school's faculty during several official cheer squad events and was apparently put in charge of other teachers on school excursions. While his exact position in the school hierarchy is unstated, he is definitely not the Principal, as that office is held by a woman.

Like many teachers, Barkin works part-time, in his case at Smarty Mart, revealing to co-worker Ron that he had worked in the housewares department for fourteen years while claiming his job at the school was "just for the benefits". He has now also been known to be the school's football coach.

Barkin is the most prevalently seen of the school's facility. His exact position is unstated but he is often seen stepping in for other teachers who have to miss class for one reason or another. He is also the cheer squad's chaperone and schoolbus driver. Other employees, such as the principal, are not seen or are temporary employees, such as the janitorial staff[3].

He is shown to have had military experience in the Marine Corps. He maintains an exercise schedule that involves daily swimming.

He is the troop leader of a profitable Pixie Scouts troop.

Barkin's relationship to Ron was often antagonistic, which seemed to stem from an incident in the Ninth grade where Ron looked at him funny; Ron insisted Mr. Barkin had it in for him ever since, a claim that by Barkin's own admission proved true. Such examples of Barkin having it in for him were when he demanded Ron hand in homework before the school doors were even unlocked, or giving him trouble for leaving before he dismissed a class even though the bell had rung. Ron had served in detention a few times already by Sophomore year. However, there are times where Barkin came to respect Ron's unique abilities, such as the time where Ron ended up taking over the home economics class, and when Ron helped Barkin's Pixie Scout troop with their muffin drive.

When Ron tried out for the football team at the start of his senior year, Barkin told him that they were not the tryouts for towel boy. However, in his second attempt, Ron stunned Barkin with his sudden show of skill. This turned out to be the result of Ron's use of Kim's supersuit, without which Ron found he had to rely on his own running-away skills to make it through a game. As a result, Ron set a new rushing record and was allowed to stay on the team despite cheating to get onto it in the first place.

Since Ron got a job at Smarty Mart, he and Mr. Barkin became co-workers, and Ron once complained about Barkin's attempt to teach him on Smarty Mart time.

As Kim and Ron's graduation approached, Barkin revealed that he and Ron were actually very similar in many ways, at least when Barkin was young, indicating that at least some of Barkin's treatment of Ron came from seeing himself in the young man. Based on his own experiences, Barkin attempted to give Ron some genuine advice on the future and what he would face. Barkin was subsequently annoyed by Ron's final high school stunt of showing up to graduation in his space suit rather than conforming to the dress code.

While Mr. Barkin does not show the same disdain for Kim that he has for Ron, he has often found himself at odds with her, particularly when she attempted to bail on the detention she received for being tardy three times in one month. Barkin generally respects her as a top student, but is not afraid to point out her shortcomings, such as when she had not begun her college selection process. However, when trouble begins, Barkin has no problem seeking Kim out to deal with the situation.

After the alien invasion and the interrupted Graduation, when Barkin told Kim "things are going to be boring here without" her, she replied that he "still had the 'Tweebs'", whom he later chased after they destroyed his new car, which he had replaced after the first one had also been destroyed by Jim and Tim.

When Shego showed up at Middleton High as substitute teacher Miss Go, Mr. Barkin was immediately smitten. Having been turned good by Electronique's Reverse Polarizer, a modified Attitudinator, Shego was far more receptive to Steve's advances than she normally might have been. "Stevie" took Miss Go out on a date, which at Shego's request was a double-date with Kim and Ron. Barkin gave the younger couple a quick out, though, and Miss Go and Barkin had a wonderful time.

A second date at a skating rink never materialized, however, as by then Shego had been restored to her normal, evil self, although she had not formally broken off the budding relationship. Barkin showed up at Drakken's lair to serenade Shego, with disastrous results which involved attack dogs and electric shocks.

Barkin is voiced by Patrick Warburton in all four seasons.

Retrieved from "https://kimpossible.fandom.com/wiki/Steven_Barkin?oldid=36873"
Community content is available under CC-BY-SA unless otherwise noted.