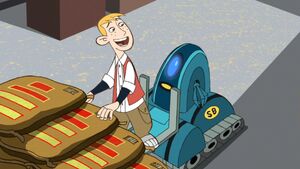 Each stockbot had extending arms, and a forklift on its front. They were able to scan products and update the store inventory in seconds, as well as deliver products to their proper departments, although there were apparently some bugs to be worked out in the latter area. Mr. Barkin feared the stockbots might one day completely replace Smarty Mart's human workers.

Once they were repeatedly reprogrammed by the Ultimate Remote Control, various security features were unlocked, including rapid-fire lasers and a reciprocating knife cutter bar. In addition, the stockbots were notably stronger, faster, and more aggressive in that state.[1]

A stockbot helping Ron
Add a photo to this gallery

Retrieved from "https://kimpossible.fandom.com/wiki/Stockbots?oldid=35099"
Community content is available under CC-BY-SA unless otherwise noted.