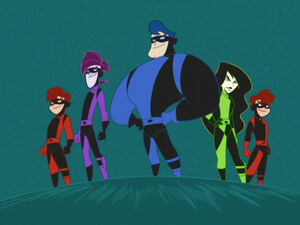 Team Go is a group of superheroes who protect Go City. The team consists of four brothers, all of whose names have a format consistent with personal pronouns preceding the syllable "go": Hego, Mego, and twins both named Wego. Their sister Shego was formerly a superhero like them but eventually turned to villainy[1].

Their headquarters is the Go Tower, a structure in the shape of the word "GO" which all of Go Team reside in with the current exception of Shego. The tower's main entrance features a panel which only unlocks the door when it detects a Go Team glow, thus ensuring only members of Team Go or someone with their powers can access the tower[1].

Hego appears to be the oldest of the Go Team, and acts as its leader. His Go power is super strength. He has blue hair and eyes, but a normal skin tone and appears as very tall and muscular. Hego borrows heavily from the superhero stereotype in both appearance and personality. He also has a habit of stating the obvious, something Mego often berates him for. Hego takes pride in what he does, and is rather bossy. But he has a strong sense of justice and usually means well. He enjoys being a hero, but he is probably the most dim-witted member of Team Go.

Hego has an alter ego in the form of a Bueno Nacho restaurant manager. He wears the standard uniform and glasses while in this role, and his hair color changes to black. He treats his job there with the same enthusiasm and perfection as he does with his role as a superhero. Hego's relationship with his sister Shego is obviously strained, but he still cares for her unconditionally. He states that Shego "may be a cranky smart-mouth prone to excessive violence," but still believes she's a hero deep down.

Mego appears as tall and lanky, with a purple skin tone, hair and eyes. His 'glow' grants him the power to shrink, which he thinks is very useful (although no one agrees with him). Mego, as his name suggests, is rather self-centered, and has a large, easily insulted ego. Whenever someone else is talking about something important he tries to become the center of attention.

In terms of personality he shares some traits with Shego. He is easily irritated, and has a habit of making sarcastic or cutting remarks, usually toward Hego, who he frequently calls a "big dolt-" although it should be noted that he's not anywhere near as violent as Shego is. While his personality can make him appear mean and shallow, he is still a good guy. His relationship with his sister also appears strained, but like Hego, he still seems to care for her.

The Wego Twins are the youngest of the Go Team, and possibly an older and slightly more mature version of Kim Possible's brothers Jim and Tim. They are, in comparison to Hego and Mego, very short, and have red hair and eyes. They share their red 'glow,' which allows them to generate copies of themselves. They are rather optimistic and happy-go-lucky, and often complete each other's sentences (another similarity they have with Kim's brothers). Their relationship with Shego isn't very clear, as she doesn't address either of them directly at any point.

Shego is the only female of the Go Team, however, she is no longer associated with them. It seems she always had a temper, had always been cranky, was always irritated with her brothers, and during her time on the team had an increasing interest in evil. She apparently went to college and has a degree in child development. She is the hired sidekick to Dr. Drakken. Shego still wears her Go team outfit, which is green and black. Her green glow includes the ability to generate destructive plasma, which she uses in a variety of ways. Despite being the only member to "go bad", Shego's brothers credit her with being the one who kept them focused, as without her guiding influence the team always quickly fell apart due to constant bickering.

Though nothing was mentioned about their parents, all of the members of Team Go received their powers from a rainbow-colored comet that crashed into their treehouse when they were children. Since then, Team Go assumed the responsibility of using their powers for the greater good. The team disbanded after Shego left to pursue a more villainous lifestyle, mainly because she was the one who kept the rest of her siblings in line and focused on the task at hand.

Team Go first debuted when their old arch enemy Aviarius appeared and stole the powers of Hego, Mego and the Wego twins. Coincidentally, Kim Possible and Ron Stoppable were in Go City at the Mucho Grande Bueno Nacho where Hego lost his powers. During the encounter, Hego's super strength was transferred to Kim. This triggered a series of events which led to the reformation of Team Go in an effort to save the Wego twins who had been captured by Aviarius. After arriving at Aviarius' lair and bypassing his security measures, Team Go and Team Possible confronted Aviarius. He was able to steal the final two powers and turned the united might of Team Go against them. Despite this advantage, he was finally defeated, and though Shego once again returned to work for Dr. Drakken, the rest of the team all acknowledged that they were glad to have been reunited.[1]

Although it was unclear if Team Go remained disbanded after that point, their reunion did seem to have improved communication and willingness to work together among the four brothers. A later visit to the Go Tower by Team Possible found Hego manning the fort alone, but he mentioned that his three brothers were on a cruise together, and that he had been unable to go with them due to a work conflict.[2]

The full roster of Team Go was once again reunited by a villain's plot when Electronique broke out of prison and used her Reverse Polarizer to turn the team into her evil henchmen. However, as Shego had already been evil, she alone was turned good and escaped, managing to obtain Team Possible's aid after proving her intentions were good. Electronique and the evil Team Go began a city-wide crime spree until Shego and Team Possible confronted them. In the resulting battle, Team Go was restored to their rightful state, which allowed them to defeat Electronique. However, Shego was accidentally turned evil again after the battle, and the Reverse Polarizer was smashed immediately afterward, which once again left the reunited team without their sister.[3]

Retrieved from "https://kimpossible.fandom.com/wiki/Team_Go?oldid=33507"
Community content is available under CC-BY-SA unless otherwise noted.